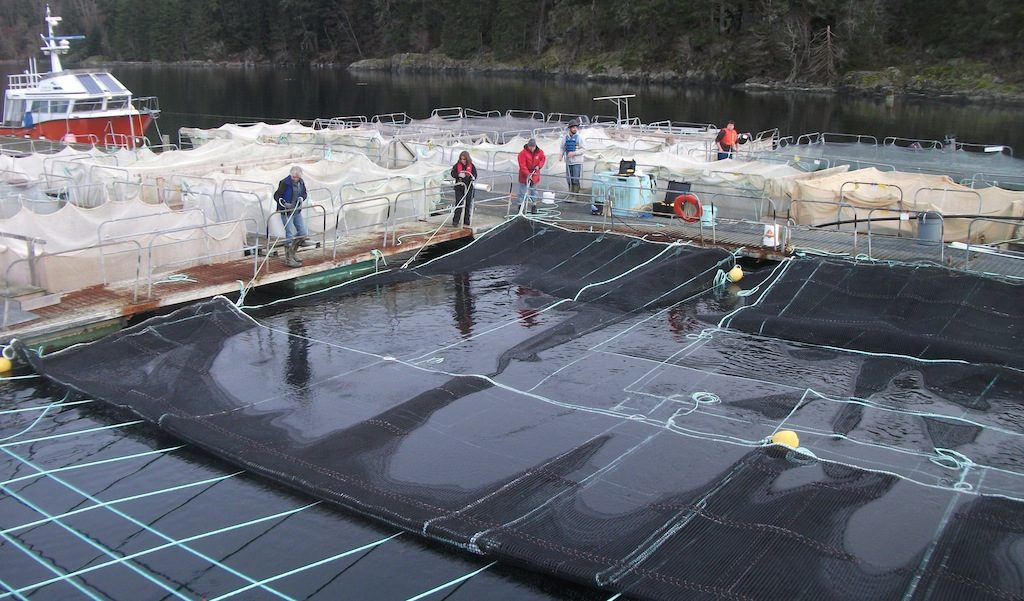 Working away very quietly but also very scientifically, almost completely in the background of British Columbia, Canada’s salmon-farming industry, is a small but forward-thinking company that this year turns 30 years old.

One of the most certain things about Yellow Island Aquaculture Ltd’s (YIAL) roughly 18-pen operation is that at any time of the year you will find it in the middle of numerous research projects and trial studies regarding the rearing of Pacific chinook salmon.

When this publication visited the farm site for the installation of the new knotless K-Grid plastic mesh from Kinoshita, this writer was told by president Dr John Heath, a now-retired heart specialist from Campbell River, just across Discovery Passage, that the firm had a total of 23 research projects under way and was looking forward to adding the new mesh to the list.

YIAL works closely with four major universities in Ontario – Western, Waterloo, Windsor, the University of Guelph – and the University of Northern BC and has been closely associated with the production of some 70 scientific papers.

Other reports, studies, documents and records are constantly being compiled by Heath and his wife Ann, company vice-president and the holder of a Master’s degree in human genetics from McGill University.

Heath and his wife, who are known for their pains-taking attention to detail, said the company was looking forward to studying the new trial net, which is on permanent loan for several reasons.  Not least is how it will affect the fish inside the net and whether it will aid the farm’s non-lethal protection program against seals and to a much lesser degree sea lions. Heath confirmed that to date no seals or sea lions have been able to penetrate inside any of the farm’s fiercely-maintained containment nets.

To the greatest degree possible, said Heath, the unit mimics nature and practises organic and sustainable methods of production.

That includes non-lethal predator deterrence and non-use of drugs and antibiotics or hormones, as well as no copper coating against fouling on the nets by abrading mussels or nylon-net devouring sea urchins.

It’s hoped that the new netting, which costs some $25-30 a square metre, will prove unappetizing and impenetrable to the sea urchins, and need much less maintenance, repair and replacement than the much more expensive brass chainlink netting.

Now it’s in the process of being tested for the first time in North America, not so much as an anti-predator net – known as a pred-net in the fish-farming industry – as a containment or growout net. Though it will, of course, hopefully serve to also keep predators such as seals and sealions from harassing, killing, stressing and wounding food-fish inside.

The first such trial version of the new K-Grid net in Canada was put together recently – with extensive assistance from Kinoshita – at Morenot Aquaculture’s Campbell River Netloft (CRN) in British Columbia, Canada.

And the final design and construction of net, which was then installed at Yellow Island Aquaculture Ltd (YIAL) salmon farm, just across Discovery Passage on Quadra Island (see separate article), were aided from both Japan and Chile, where Kinoshita has production units for the new Muketsu (Japanese for knotless) K-Grid nets.

The toughened mesh from which the K-Grid nets are built is made by weaving or braiding four strands of polyester fibres together. At that initial stage, the strands are fully flexible and totally collapsible.  The material is then stretched to open the netting, and the strips, which are always 90-meshes wide, are then fed through a specially designed oven.

There are only two of those ovens in the world, according to CRN manager Doren Anderson and Ramon Meza Soto, Kinoshita sales manager in Iquique, Chile, who assisted in the labour-intensive assembly. Kinoshita’s main oven is in Japan.

The oven heats the polyester strands of the stretched net to 180oC, which melts the outside of each braid. When the mesh comes out of the oven and cools, the plastic stiffens, to form a strong, smooth and tough but fairly stiff surface around the webbing’s still-flexible core. That allows the meshing to be bent, so the panels – which come out in lengths from 45 to 60 metres long and then cut to various lengths –  can be made into rolls for transportation to the net-assembly site, and for the final net to be folded for taking to the farm for installation.

Meza Soto said the new stiff netting was already being used against sharks in net-pens at a salmon farm in Tasmania, and it’s also being tested against saltwater crocodiles in northern Australia.