Despite 370 miles of coastline, no shellfish has been farmed in the state. That’s about to change 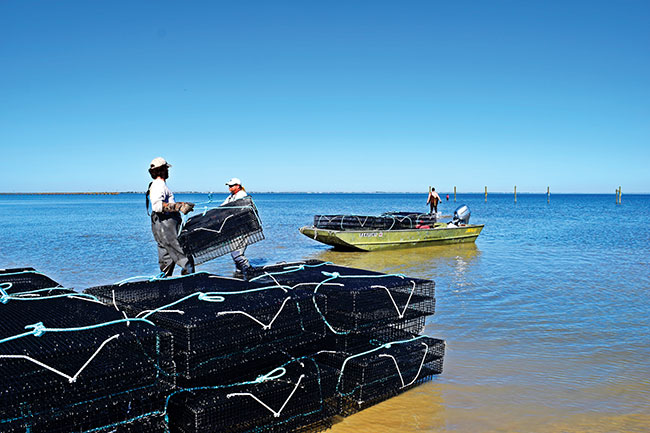 Texas is expected to unveil regulations for oyster farming in September 2020.

Up until now, Texas was the only coastal state in the US that did not have a farmed shellfish industry. Governor Greg Abbott signed the bill that allows oyster farming along the Texas Gulf Coast in May.

The decline in wild oyster harvest due to environmental degradation and the rising local demand for the meaty bivalve are mainly behind the development, according to Dr Joe Fox, associate professor at Texas A&M University-Corpus Christi (TAMU-CC).

“Wild oyster harvests have been declining because of natural disasters. In 2017, Hurricane Harvey basically killed all the oysters in Galveston Bay, which is where 80 percent of the wild oysters come from,” said Fox.

“The state keeps pushing more and more towards limiting the public season in public fishing grounds,” he adds. “The bag limit was once 120 sacks of wild oysters per boat per day, now it’s down to 30 sacks per day.”

Over the past six to seven years, Fox and TAMU-CC colleague Dr John Scarpa have served as “educational and informational resources” for local communities. They believe the education campaign has helped defuse conflict with other user groups such as commercial fishermen, sports fishers and homeowners, and has led up to this point.

“The rest of the Gulf of Mexico has been at it (shellfish farming) for the past eight or nine years. We’re basically the last holdout among the Gulf States. We’re kind of running a race dead last with Georgia,” says Fox.

He estimates the state’s farmed oyster industry could bring in $70-$90 million in economic benefit by shoring up the shortfall in wild oysters.

“I think people will start buying Texas oysters because if you talk to big restaurateurs, like Pappas Brothers with a hundred restaurants in the state, their big headache is the shipping cost in bringing oysters in from other states. If you can reduce their shipping costs, they’re going to brand and market them, and the lateral economic benefits of that will be really high.”

However, Fox and Scarpa acknowledge there are still several issues to address before anyone could start planting oyster seed.

Scarpa says: “People would be ecstatic if we could say we’re going to have an oyster in the water in September 2020. But for me the biggest questions that have yet to be answered are: where can it be done and how does one get a permit? And if we can get those things all done in the next year, I’ll consider that success.”

They expect the regulations from the Texas Parks and Wildlife Department will answer those questions, as well as matters pertaining to seed supply.

“We’ve identified supply of seed oysters as our big bottleneck come September 2020. There’s really no source at this time. We can’t bring in seed oysters from other states, even though it’s the same species, for genetic diversity reasons. What we desperately need is for the State to step up to the plate and establish a state hatchery as other states have done,” says Fox.

They believe, or at least hope, the regulatory authorities will be reasonable in drafting the rules. “The rules and regulations have to support and sustain an industry—an industry that makes people money or else it’s just not worth doing. I think Parks and Wildlife and the state agencies are solidly behind it. We’ve gotten assurances from everybody that they realize it’s a bona fide industry and it’s going to happen here. And we’re out to improve coastal economic resilience for these communities that were hard hit by hurricanes.”