Helping the aquaculture industry tell the world its story will be one of the priorities for Jamie Fox as Minister of Fisheries and Communities in the Canadian province of Prince Edward Island (PEI).

The former police chief and business owner, who has been an elected provincial representative since 2015, assumed the portfolio in May when the new provincial government was sworn into office. He spent considerable time on the road visiting leases and processing plants for both aquaculture and the commercial fishery during his first month on the job. He was clearly impressed with what he saw.

“The industry has a tremendous story to tell,” said the rookie minister. “We are going to explore ways to help promote the sector both at home and across the world. That will help the industry attract new markets.”

Fox said he hopes it will also raise awareness among the general population about the importance of the industry to the island’s economy. PEI’s farmed mussel industry yields 50 million lbs annually, representing 80 percent of mussel production in Canada.

The new minister said he was impressed with the strides that have been made to date, pointing out many growers and processors have shifted away from using plastics, including a shift to wooden packaging. 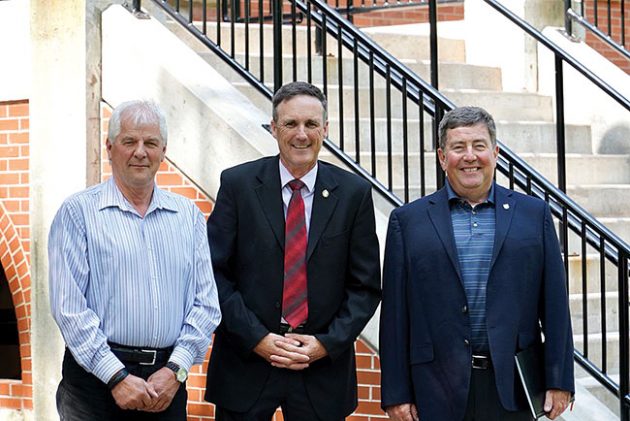 Jamie Fox (center), PEI’s Minister of Fisheries and Communities, with Ian MacPhearson and Bobby Jenkins of the PEI Fishermen’s Association at the launch of a mental health initiative for industry workers in July
Credit: @JamieDFox on Twitter

“I was really impressed to learn about the environmental benefits of this industry. I suspect it is something most islanders are not aware of,” he said. “The more support we have for the industry from our rural communities and the population in general, the easier it will be to ensure our long-term success.”

Fox also committed to expanding the research conducted in the province through a joint effort with industry and the federal government.

The minister said the difficulty in attracting workers was brought up in pretty much every conversation during his visits to farms and processing plants. “While I don’t have a magic bullet to solve the issue, I can commit to working with industry to improve the situation,” Fox said.

In July, Fox helped launch PEI’s free counseling service for members of the PEI Fishermen’s Association (PEIFA), the Prince Edward Island Aquaculture Alliance, and their families. “The health and well-being of those who work in the fishing and aquaculture industries is of prime importance to us,” Fox tweeted.