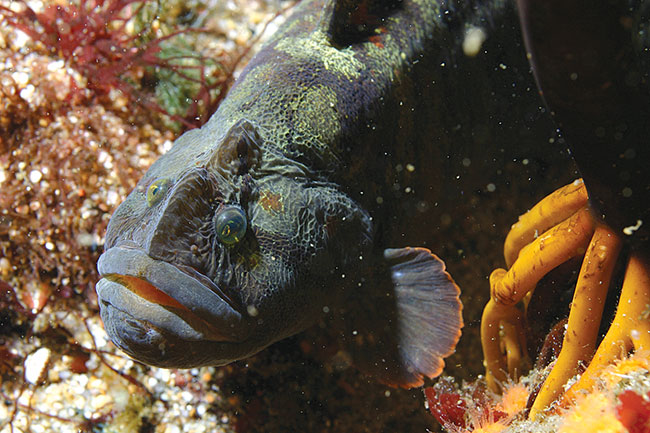 It isn’t much to look at but the monkeyface prickleback (Cebidichthys violaceus) could be a model candidate for sustainable aquaculture.

The fish nourishes itself with only the specialized algae in the tidepools where it lives, according to researchers at University of California Irvine, who studied the fish’s genome.

The fact that it is vegetarian means it can be raised with feed that doesn’t rely on fishmeal and fish oil. “Using plant-based food ingredients reduces pollution and costs less,” said study team member, Joseph Heras.

The fish could grow up to three-feet long and six pounds in weight. It can live on land for up to 37 straight hours, thanks to its ability to breathe above water as well as under.

It is native to the Pacific coast of North America. In the past decade, it has become a culinary delicacy, appearing on plates in a number of high-end restaurants.

While it looks grotesque, “the taste is actually delicate and mild,” said Donovan German, associate professor of ecology and evolutionary biology. He and his team said it could be “the new white meat.”

The team discovered the types of genes that enable the monkeyface prickleback to digest plant material well. This discovery could help scientists find other potential candidates for aquaculture.

“Most aquaculture fish are carnivores and can’t handle plant lipids. Sequencing this genome has provided us a better understanding of what types of genes are necessary for breaking down plant material. If we scan additional fish genomes, we may find omnivorous fish with the right genes that could provide new candidates for sustainable aquaculture,” said Heras.