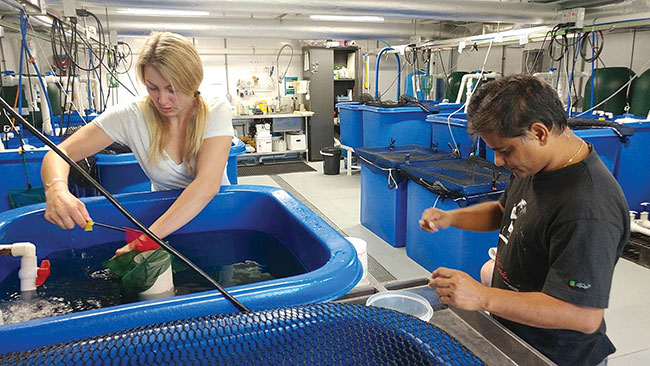 Professors Pallab Sarker and Anne Kapuscinski of the University of California-Santa Cruz received a $496,000-grant from the US Department of Agriculture (USDA) to support the development of a more sustainable feed for rainbow trout.

The scientists are looking at replicating the success they had with the fish-free tilapia feed (see story on page 5).

They chose rainbow trout feed as their next subject because it is the most widely cultivated cold freshwater finfish in the world and also “an important model for all farmed salmonids, which dominate finfish aquaculture,” said Sarker.

He acknowledged that several leading aquafeed and ingredients companies have recently started including DHA-rich oil from microalgae into salmon feeds. Among these are AlgaPrime DHA, an algae-based source of long-chain Omega-3s from Dutch biotech company Corbion, and Veramaris’ algae-derived oil.

Sarker is looking at replacing traditional fishmeal or fish oil ingredients with several types of oil-rich and protein-rich marine microalgae. “One type would be microalgal co-product that is a waste product left over after Omega-3, called EPA, has been extracted for use in human nutritional supplements,” he said.

“The results will characterize nutrient and anti-nutrient levels in processed co-product protein meal. This will fill a knowledge gap important for encouraging the aquafeed industry to use this new protein ingredient,” he said.

The rainbow trout were scheduled to be stocked into the tanks at UCSC’s new recirculating aquaculture facility this past February, where digestibility experiments will be conducted.