‘Vacuum cleaner’ for the ocean 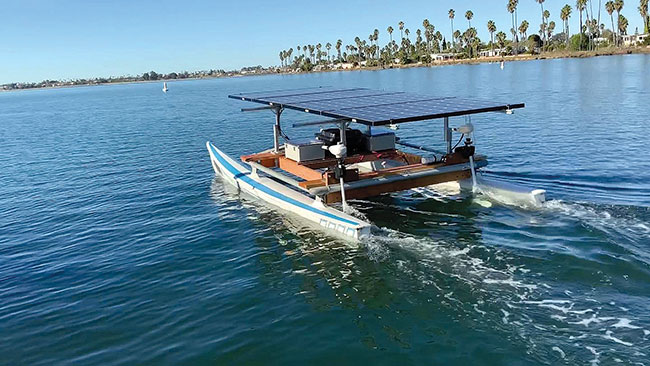 A 16-foot model of FRED, a solar-powered marine vessel designed to collect trash on open bodies of water. A 50-foot version of the trash collector is in the pipeline Photo: Clear Blue Sea via Facebook

Enter FRED, a “vacuum cleaner” for the ocean being developed by California nonprofit Clear Blue Sea. Short for Floating Robot for Eliminating Debris, FRED is a solar-powered marine vessel designed to collect trash on open bodies of water.

FRED’s debris collection conveyor belt picks up floating debris sized from about 10mm to 1m long. The vessel is still in development but the team hopes to pilot test a design in Hawaii this year. The team is working on a 50-foot version of the trash collector.

Clear Blue Sea says it is partnering with sustainable recycling organizations to ensure the plastic is repurposed and does not end up back in the ocean. It is seeking funding (www.clearbluesea.org) to fulfill its mission to cleanse the oceans of plastic pollution.

While the challenges posed by marine debris, plastics and microplastics are well known, so too is the fact that no single solution exists to solve them. Another nonprofit, called The Ocean Cleanup, is in a more-advanced stages of development of its garbage collection system for the ocean.