A special town meeting in Jonesport, Maine scored a decisive victory for aquaculture in the State of Maine 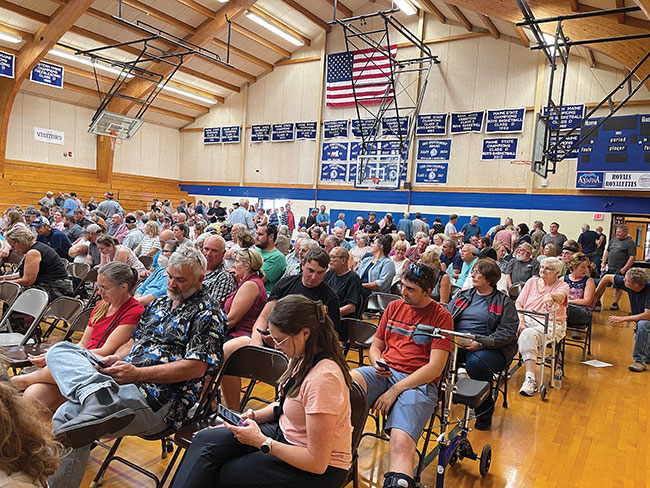 Voters converged in a high school gymnasium in Jonesport, Maine to defeat a proposed moratorium on large-scale aquaculture on July 20. Photos: Lynn Fantom

Voting 201 to 91, residents of this lobstering community of about 1,250 rejected a proposed moratorium on commercial aquaculture facilities.  It was a significant sign of support for Kingfish Maine to move forward with its proposed recirculating aquaculture system (RAS) facility, projected to produce 6,000 to 8,000 metric tons of yellowtail annually.

The events on the warm summer evening came at a time when Maine has seen some chilly opposition  —from organized statewide groups, as well as local communities — to aquaculture projects that have ranged from land-based RAS to a well-established oyster farm that sought to increase its lease to 35 acres (and succeeded).

But by far, the greatest pushback has been against American Aquafarms, which proposed 120 acres of semi-closed pens in the bay between two sections of Acadia National Park.  In November of 2021, some 200 residents of Gouldsboro, the intended home base for the hatchery and processing plant for 30,000 metric tons of salmon, voted overwhelmingly for a fish farm moratorium — not unlike the one proposed for Jonesport.  But the following April, the Maine Department of Marine Resources also rejected the company’s application because it did not have an approved salmon egg source.

Some might say there’s pushback against aquaculture in Maine. Others affirm the system works the way it should.

“Aquaculture is so broad. Social license really depends on the type and the fit with the community,” said Emily Whitmore, a PhD candidate at the University of New Hampshire who studies factors linked to public support of aquaculture.

Immediately after the vote in Jonesport, Executive Director of the Maine Aquaculture Association Sebastian Belle said, “This is a great example of how truth wins over innuendo.  The system in Maine works.  The Kingfish team worked really hard getting to know the people in Jonesport and sharing their plans.  They were open and transparent.  The town recognized the value for their own community.”

The news about the vote reverberated up and down the coast of Maine, which in many ways leads the U.S, in aquaculture.

Building upon its iconic lobster fishery — which saw values soar to $725 million in 2021 — this northeastern state has worked diligently to create a business climate that supports aquaculture entrepreneurs and to develop new ones.  In roughly 15 years, some 300 people, many from working waterfront families, have attended training academies sponsored by the Maine Aquaculture Associate in cooperation with Maine Sea Grant and the Island Institute. About 60 percent go on to work in aquaculture, according to Belle.

Today, Maine’s aquaculture companies, both big and small, grow salmon in net pens, eels in a RAS facility, oysters in semi-submerged cages, and blue mussels on the bottom and ropes.  With 27 partners (mostly lobstermen) farming a total of 100 acres, Atlantic Sea Farms harvested just under one million pounds of kelp during the 2022 season.

Joining the community
In late 2019, when The Kingfish Company announced its plans for an operation in Maine, CEO Ohad Maiman told Maine Public Radio that the U.S. was ripe for a farmed species other than salmon, for which two ventures were already in the works in Maine.

That new species was Yellowtail kingfish.  Highly prized for sashimi, sushi, and ceviche, it had already “found a great ally in RAS,” according to Hatchery International, with projects in Denmark, Argentina, Chile, Australia, and the Netherlands — where Kingfish launched its own pilot facility in 2017. 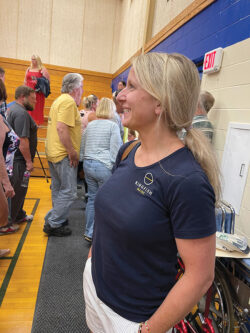 Megan Sorby, operations manager of Kingfish Maine, smiled as residents congratulated her on the evening’s vote.

Jonesport was selected from among 22 sites along the East Coast for several reasons, including its strong seafood culture and infrastructure, like cold-chain shipping.

After the vote against the moratorium, Maiman said in a press release, “When we chose the Jonesport site, we spent significant time getting to know the community and making certain we were welcome. This vote confirms that that we have made the right choice.”

Much of that community time was spent by operations manager Megan Sorby and her team at Moosabec Video and Variety, a gathering spot for coffee, cribbage, and cards on Main Street. The local library posted invitations to come for “coffee and chat” with Kingfish Maine at Moosabec, along with a link to Jonesport Fish Facts.  In June, celebrity chef Barton Seaver prepared kingfish for a “Talk and Taste” event at the library.

“It’s the responsibility of any business to be a part of the community,” Sorby said.

For Kingfish, that also meant working with the high school. The company donated a 400-gallon recirculating aquaculture system.  With a supportive principal and enthusiastic teacher, the aquaculture/aquaponics program took off. At the end of the school year, students served every class tilapia tacos.  At the July public meeting to vote on the moratorium, cucumbers from their harvest were piled high on a large table, free for the taking.

As part of the high school aquaculture program, students also have the opportunity to talk about careers with Kingfish staff. And when the town officials in charge of updating Jonesport’s comprehensive plan asked students to provide input, they said: Keep aquaculture going.  That carried weight in a state that has the oldest median age.

Opposition in Jonesport
On the evening of the vote, virtually every parking spot at the high school was taken.  An elderly woman with a walker tried to keep pace with her husband as they moved toward open doors of the gym that proudly displayed banners celebrating basketball championships. In the bleachers, a family passed around an infant, taking turns with bouncing duties.

Neighbors chatted quietly but opted not to share their views with this reporter. Emotions were held as tightly as the secret ballots, which were cast at partitioned tables the videographer was instructed not to photograph.

Huddled in the bleachers near the exit, three colleagues whispered with Crystal Canney, who pounded away on her iPad. It was an important night for the CEO of the Portland firm that specializes in public relations, government relations, and election campaigns. Canney is also executive director of Protect Maine’s Fishing Heritage Foundation, a nonprofit that has promoted moratoriums on “industrial aquaculture.”

A driving rationale of this “statewide coalition” is the belief that “fishermen are losing bottom and fishing space to large aquaculture leases,” according to its website.

However, when Sebastian Belle spoke with the newspaper, The Working Waterfront last year, he said that opposition to lease applications generally comes when somebody with a “very nice” shorefront house doesn’t want a farm in front of that house.

“Opponents realized that opposing a farm because of view scape impacts was not going to cut it in front of the legislature or the resource management agencies. So, they started organizing the local fishing community,” he said. “And I would suggest it was a very cynical and premeditated method to use one working waterfront community against another.”

Moving forward
When there is opposition, it is key for aquaculture companies to understand where it is coming from, whether the community itself or outside groups, which can be well organized and resourced.  “It’s complicated because there are lots of stakeholders,” said Emily Whitmore.  “Outside groups can hijack the whole process. But gaining support from your local community — earning social license — can buffer that.”

At the end of a tense evening of voting in Jonesport, community members filed out of the gym, many stopping to shake hands or hug Sorby.  It looked like the receiving line at a wedding.

“The ultimate level of social license is a kind of incorporation into your community identity. Like a mining town (the original source of the term) or a logging town or a fishing town,” Whitmore said.

It remains to be seen if, in the future, Jonesport will identify itself as a fishing town, on land and at sea. There’s a good chance it will.