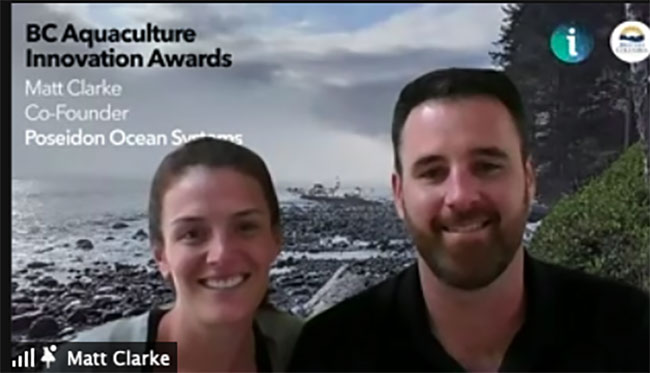 Matt Clarke and wife Heather co-founded Poseidon Ocean Systems in 2015 to deliver products that improve the efficiency of salmon farming operations. The company won one of the two $124,000 prize at the inaugural BC Aquaculture Innovation Awards on Thursday. Photos: Innovate BC

“If you build it, they will come.” And so they did: roughly 50 innovators from all over the province of British Columbia came to participate in the inaugural BC Aquaculture Innovation Awards on Thursday, among which two transformative inventions were awarded the top prize of $124,000 (C$150,000) each, and a fan favorite was awarded $20,000 (C$25,000).

The pandemic has arguably sharpened the drive to innovate on technology for seafood farming as the crisis highlighted the crucial role the industry plays in food security. Innovate BC, an agency of the provincial government, gave the trailblazers the stage to showcase their innovations.

But even as more than 600 virtual spectators celebrated the homegrown talents, there was no escaping the reality that BC salmon aquaculture is standing on shaky ground.

“We’re in a very unsettling time and I must admit this has put a chill on investment, which will adversely affect innovation,” said Diane Morrison, managing director of Mowi Canada West, a panelist in the roundtable discussion held during the virtual awards ceremony.

Nurture built-in-Canada solution
Morrison was alluding to the December decision of the Federal Government to shut down 19 salmon farms in BC’s Discovery Islands. She said innovators would thrive only in an environment where there’s stability and certainty about future of aquaculture.

“Innovation in Canada requires certainty and scale. We need the governments of Canada and BC to provide clarity on the future of the marine-based salmon farming, and that can be achieved through being recognized as legitimate users of the marine environment,” she said.

“The government also needs to help these entrepreneurs commercialize their innovations. We’re great with ideas but then we need to keep it here in Canada and have it as a ‘Built-in-Canada solution.’ But again, we need scale, we need  stability.”

Jennifer Woodland, CEO of the indigenous-owned seafood business Nuu‐chah‐nulth Seafood LP, highlighted the need for a seafood champion for Canada.

“The Department of Fisheries and Oceans as a regulator of seafood is not really the appropriate voice to be an enabler. I don’t think they were supposed to be an enabler; I don’t think they’ve done a good job of that nor do I think it’s appropriate, and there’s so many other ministries that really have the mandate that can support aquaculture, support seafood so that we can really bolster Canada not just as the leader in development, the leader in innovation, the leader in technology.” 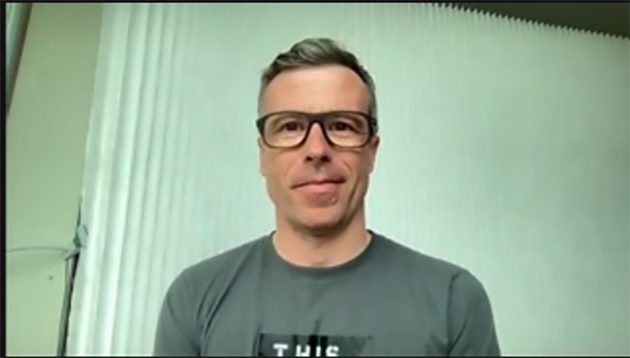 Eric Enno Tamm, Co-Founder & CEO of ThisFish, was the other winner of the $124,000 prize
Photos: Innovate BC

She said the empty supermarket shelves when the pandemic struck drove home the importance of food security. “Food security is really important to Canadians right now and when you look at what aquaculture offers we tick all those boxes: homegrown and sustainable.”

The three innovators that the judges deemed will advance aquaculture’s sustainable growth, competitiveness and adaptability are the following:

Poseidon Ocean Systems, a Campbell River company specializing in the development of salmon farming infrastructure and life support systems, was one of the two top-prize winners. The winning technology, a compressor system called Flowpressor, has demonstrated sharp improvement in water quality and fish welfare while reducing diesel fuel consumption by nearly 60 percent for off-grid fish farming systems, said the company.

Vancouver-based ThisFish Inc won for its traceability and workflow software designed for the aquaculture industry. The data-driven tool links data from farm to factory through IoT devices and tablet computers and uses machine learning algorithms to dramatically improve traceability.

Industrial Plankton of Victoria, BC won the $25,000 fan favorite award for its algae bioreactors for live feed production in aquaculture hatcheries. Their technology is currently used in 20 countries, primarily in shellfish and shrimp hatcheries.