BC salmon farmer takes the blame for debris 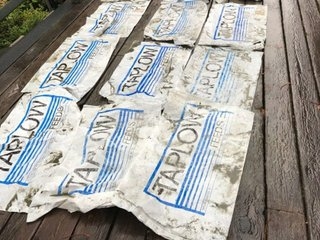 Owner Bruce Kenny in a statement said the bags spilled into the water after a series of storms battered the barge connected to its Jane Bay farm in Barkley Sound.

The first storm hit on October 18, partially sinking the barge, said Kenny. “The Canadian Coast Guard attended, and determined the incident to be of low environmental risk,” he said.

A storm on November 6 further caused damage as the company was “in the process of developing a salvage plan,” Kenny said. “After this storm a number of feed bags were recovered from Jane Bay by our staff and caretaker, and placed in empty fish totes all tied and secured onto a cement storage float. This is an unfortunate event and we want to thank the efforts of those who have helped retrieve additional aquaculture bags from beaches and the environment we all care about.”

The fish farm, which has been operating in the area for the last 30 years, could face a fine, reported the Vancouver Sun. Parks Canada, which has already recovered 2,000 feed bags since November 10 from several islands in the Broken Group Islands in Pacific Rim National Park, is investigating.