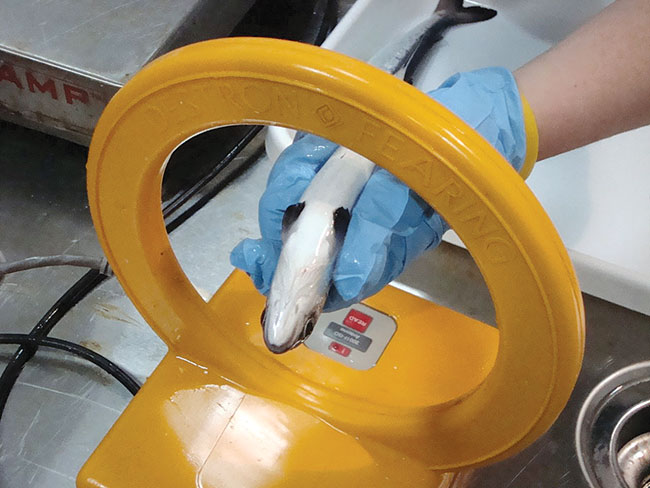 Atlantic salmon smolt inside an antenna which is reading the number of its electronic tag. Healthy collaboration between academics and industry is incentive for newcomers in Maine Credit: National Cold Water Marine Aquaculture Center

Some researchers in Maine are investigating the resistance of sea lice to traditional therapies. Others test alternative fish feeds made from soybeans or algae. And many benefit from what Dr. Brian Peterson calls a “very active, very collaborative” relationship with industry.

In turn, the scientific community is a reason aquaculture companies have chosen Maine.

Peterson is the research leader of the National Cold Water Marine Aquaculture Center (NCWMAC), a USDA facility in Franklin, Maine. Its core work is a large selective breeding program that zeroes in on traits such as weight, fillet color, fillet fat such as Omega-3 fatty acids, and sea lice resistance.

Scientists at the center culture all stages of life of the North American strain of Atlantic salmon, from fry to parr in recirculating water tanks and then to grow-out in marine net pens. For about 18 months, Cooke Aquaculture then takes over, feeding and caring for the center’s salmon. They grow alongside Cooke’s fish, differentiated by an electronic tag.

“I think our program is unique because the salmon are evaluated under real industry conditions,” Peterson says. After making new crosses, the researchers give Cooke their top one percent. “They will use those fish as their future brood stock. Their fish are our fish.”

As new land-based systems come to Maine, Peterson adds, they will have access to this improved germplasm as well. This healthy collaboration between academics and industry is incentive for newcomers.