Cooke Aquaculture issued scathing press release today pre-empting the official announcement of the findings of the investigation into the collapse of the company's salmon net pens in Washington State, due today at 11 am PST. 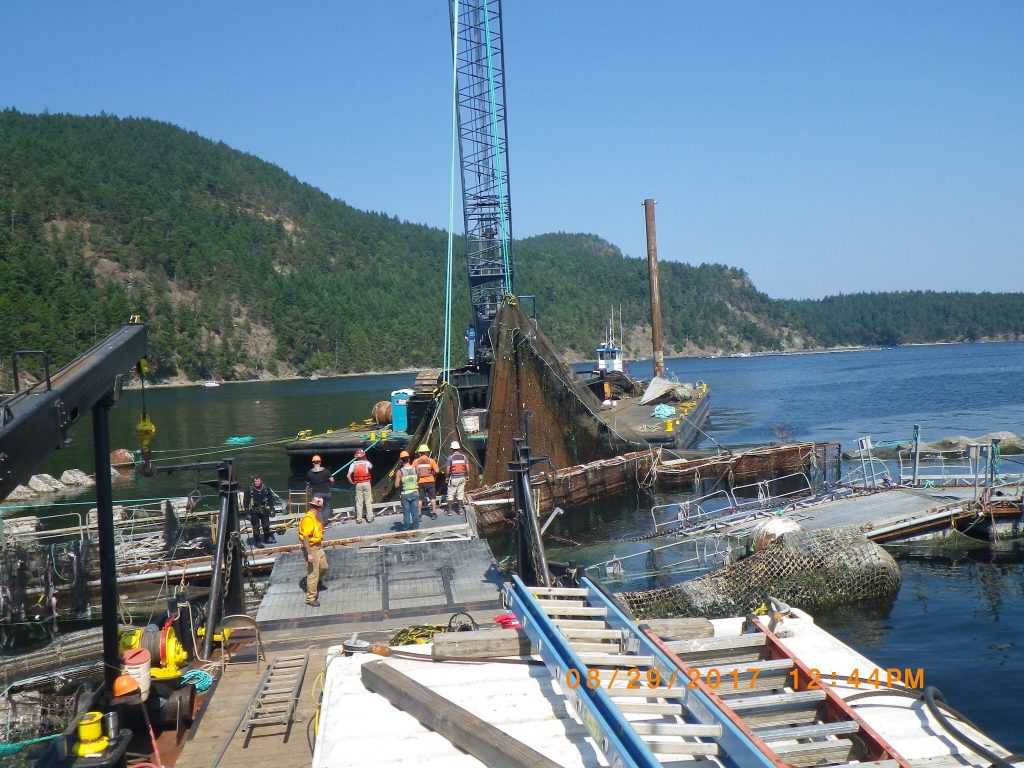 Workers salvage collapsed net pens at Cooke’s farm in August 2017. The investigation into the collapse is incomplete and inaccurate

Cooke criticized the investigation conducted by the state’s Ecology, Fish & Wildlife, and Natural Resources departments as “incomplete and inaccurate” and “conducted by investigators with limited experience in aquaculture or net-pen operations.”

The multi-agency report, “2017 Cypress Island Atlantic Salmon Net Pen Failure: An Investigation and Review,” will create unfair prejudice against Cooke in Legislature, as it debates the future of salmon farming in the state it said.

“Cooke Aquaculture was shut out of this investigation by the state agencies,” said Joel Richardson, vice president of public relations at Cooke, Inc. “As a result, investigators with limited experience in aquaculture or net-pen operations have produced an inaccurate and misleading document that appears to be intended to fuel the push by aquaculture opponents to put Cooke out of business in Washington state.”

Notably, the state’s accused Cooke of overestimating the number of fish it recovered from the collapsed nets. In fact, Cooke employees counted each fish as it was recovered under the state’s supervision. The report’s estimate, meanwhile, was based on a flawed estimate of the average weight of the recovered fish.

The report, “2017 Cypress Island Atlantic Salmon Net Pen Failure: An Investigation and Review” was compiled by the state’s Ecology, Fish & Wildlife, and Natural Resources departments. The final report is slated for release today at an 11 a.m. news conference timed to influence the Legislature’s ongoing deliberations about bills related to aquaculture, including proposals that would effectively ban salmon farming in Washington.

Cooke Aquaculture Pacific was given just three days to provide feedback on a 266-page draft – a review period that ran from Friday to Monday – and was instructed not to dispute the report’s analysis or conclusions. Today’s press conference was announced three hours after the agencies received Cooke’s comments.

“We provided substantive comment back to the agencies under an unfairly brief timeline to address the report’s major factual errors and omissions about what occurred at our facility late August,” Richardson. “We cooperated fully with the investigation and stood ready to provide expertise, background and context to help the investigators in their work. Unfortunately, we don’t believe the public or lawmakers are getting a complete and accurate picture from this report.”

The after-the-fact questioning of Cooke’s accounting of fish removed from the net pen structure is the most egregious – but not only – example of the draft report’s inaccuracy.

“The same people that supervised and approved the counting of the fish created this new analysis, based on back-of-the-envelope math involving the capacity of a tender vessel and the ridiculous notion that the recovered fish weighed 7 pounds apiece,” Richardson said. “As the photographs in the report itself show, many of the fish were severely damaged by the time they were recovered and would have been far lighter. “

Another example of the draft report’s inaccuracy is the blanket assumptions about the conditions of the nets.

“We acknowledge that the site fell behind in net hygiene prior to the mooring failures in July. However, Cooke provided the investigators extensive documentation of the washing performed at Site 2 after the July incident,” Richardson explained. “Although the report is correct that mussels were present in the bottom of the nets, the investigative panel lacked the expertise to make that judgment about the relationship between fouling and drag, and did not rely upon alternate expertise when forming the conclusions reflected in the report.”

Cooke endeavoured to cooperate with the investigation from its inception but was excluded from meaningful participation after only a few weeks. While Cooke was excluded, two Native American tribes who have repeatedly called for the ban of Cooke’s operations were given full access to the process and allowed to provide comments and observations during the deliberations.

“Excluding Cooke but including net-pen opponents stacks the deck against Cooke,” said Richardson. “Tribes, lawmakers, Cooke, the public – we all deserve to know the truth, and this report should be driven by a full and accurate understanding of the facts. Unfortunately, this document is neither accurate nor objective.”