From software to shellfish 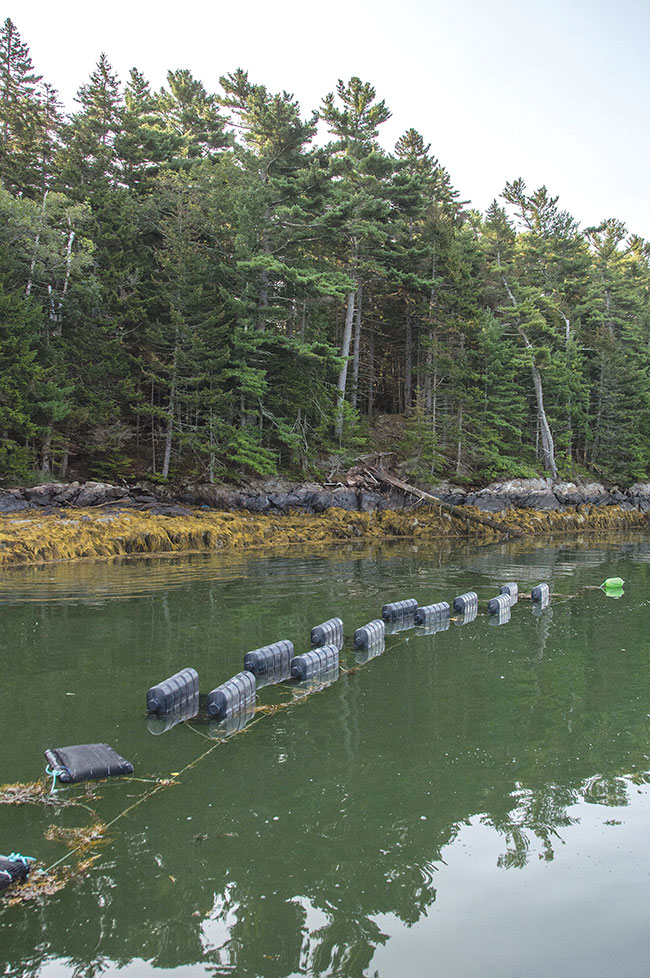 Jordi St. John makes a good living working for a software company based in Washington, DC. But St. John is not just a desk jockey – he spent many years on the water and had previously served as a captain on Windjammers Cruises in Portland. When he noticed increased aquaculture activity on the New Meadows River near his home in West Bath, Maine, he again heard the water’s siren song.

St. John allowed himself to be seduced by the water’s call and now he and wife Katrina are owners and operators of Merritt Island Oysters while still holding down their day jobs. In September 2017, they bought their first batch of seed and were able to take about a thousand to market in September, October and November 2018. He gets his hybrid Haskins North East High Survival (NEH) diploid oyster from Muscongus Bay Aquaculture.

“We are doing suspended, floating cages, and I’ve been doing four bag cages just because it’s easy enough to be able to flip them and maintain them as one person,” says St. John. “We started off with about 20 to 25,000 and then did another 20 to 25,000 more in the spring of 2018. My wife is actually a high school science teacher, so we’ve been doing a few different experiments just in terms of trying to test floating bags versus cages and trying to study water temperatures a little bit and salinity levels.”

St. John says his approach has been to try to keep his bag densities down and to ensure that he flips the cages once a week and allows 24 hours of dry time to keep fallowing down. He decided against using a tumbler and hand culls, and sorts and shakes the oysters himself. These efforts, along with the water quality in the New Meadows River, have helped to produce an impressive product.

“It’s been amazing how quickly the oysters grew. I think that has a lot to do with the warmer water temperatures last summer,” says St. John. He marvels at their flavor. “They really come out quite sweet and salty. It’s been impressive. I wasn’t necessarily sure that was going to be the case. As you start growing, you hope to find a good site and we kinda got lucky.”

Merritt Island is owned by Bowdoin College of Brunswick, Maine. The college’s Bowdoin Outing Club offers its members a wide range of water activities on the island. St. John says the location has been ideal and the college has been very supportive in his conversations with them during the Limited Purpose Aquaculture (LPA) license application process.

“They’ve been really, really helpful, proactive and excited about things,” says St. John. “And because I’m right up against the island, I don’t have land owners sitting there getting upset about looking at floating cages. I’ve got a college that’s proactive about aquaculture and what that means for the state of Maine, how it’s obviously growing and growing.”

The response to the product has been encouraging. St. John says that at Portland’s annual Harvest on the Harbor festival, their oysters ranked very well in comparison to oysters from far more established companies. They’ve also formed a productive partnership with a Portland oyster bar called the Maine Oyster Company.

The biggest challenge of establishing the operation, in St. John’s view, is trying to balance the desire to grow the business against the limitation of his possible workload.

“Say you’re looking at 50,000 oyster seeds this summer. By doing that, how much more is that going to increase my workload? Working a full time job, I mostly do it on weekends and I can work from home, so I can sneak out here and there to do it. But do I eventually make it a full time operation, this is all I do and really try to expand it?”

While St. John does most of Merritt Island Oyster’s labor himself, he does have some good farm hands – his children, seven-year-old Aislyn and four-year-old Sylvan. That’s part of why they decided to go ahead with the farm, so the entire family could be on the water and have something they could all do together. Aislyn, in particular, has shown some early interest that could someday blossom into a full-blown career on the water.

“When we’re bringing the oysters back, I’ll say ‘hey if you can do this for half an hour, I’ll give you a dollar.’ She literally, as a six-year-old last summer, would just sit down and sort our oysters out by size. Yeah, she’s an entrepreneur, so you never know what will happen there.”