Commercial octopus farming is being explored on multiple continents as a potential new avenue for aquaculture. However, a team of researchers led by Jennifer Jacquet of New York University’s Department of Environmental Studies are concerned about potential negative impacts on sustainability and animal welfare. 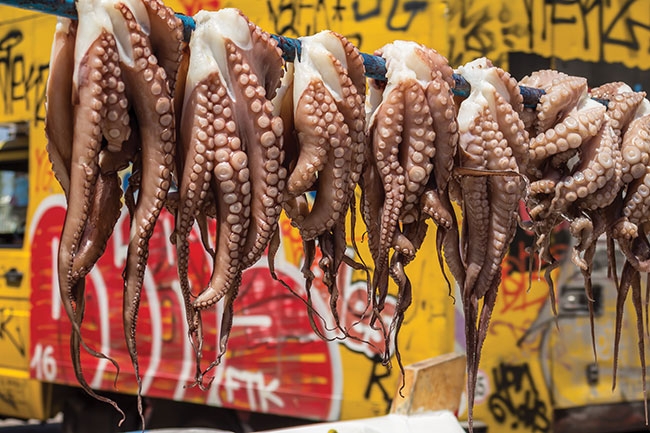 “We are living during the rapid domestication of aquatic species and research is almost entirely around the question of which aquatic animals we can farm, rather than which animals we should farm,” Jacquet told Science Daily. “Mass producing octopus would repeat many of the same mistakes we made on land in terms of high environmental and animal welfare impacts, and be in some ways worse because we have to feed octopus other animals.”

Spain, Mexico, Japan and China are increasing their effort to develop knowledge and techniques for commercial-scale octopus farming. A Japanese-based seafood company called Nissui is predicting farmed octopus will be ready for the market by 2020.

The researchers’ examination of existing scientific research has raised several concerns. Octopus farming would produce high levels of nitrogen and phosphorus pollution, contributing to oxygen depletion. Octopi have also been shown to have cognitive and behavioral complexity, making them ill-suited to the enclosed environments common in farming. Further, the researchers also raised concern over adding another species to an industry already struggling to reduce the amount of fishmeal used.

Without farming, it is unlikely that many people will continue to eat octopus. However, unlike discussions around some other farmed species, this does not present a concern from a food security perspective – the main markets which consume octopus such as Japan, South Korea, the US and Australia, are food secure.

Octopus farming is currently constrained by technological limitations, but advances could make industrial-scale farming a reality in the future. Jacquet says she hopes that when that opportunity comes, that animal welfare and associated environmental problems will be taken into account.