Features Shellfish
Planting the seeds of a new industry in Mississippi

Could this course be the start of a new industry in Mississippi? 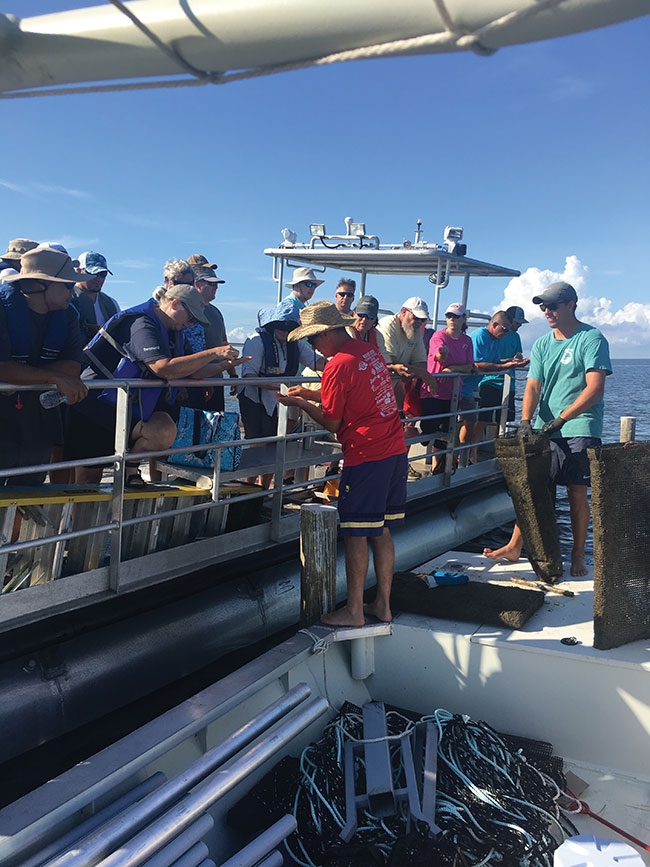 Dr. Bill Walton of the Auburn University Shellfish Lab and Jason Rider of the Mississippi Department of Marine Resources showing oyster seed to the class. Could this course be the start of a new industry in Mississippi?

Fourteen of the 20 students in the first class have moved on to the next phase of the program – raising their own oyster seed on site at the Deer Island Oyster Park. Planning for the second year for the course is underway.

The course was led by Grice, Dr. Bill Walton of the Auburn University Shellfish Lab and Jason Rider of the Mississippi Department of Marine Resources. Grice says that the course’s first phase comprises five classroom sessions, both held in class and on site at the Oyster Park, covering all aspects of oyster aquaculture. Students are taught the off-bottom technique (on-bottom is challenging in the area due to predation), and are able to consult with gear manufacturers and others on aspects of running an oyster farm, such as budgeting and crop management.

“We completed the course in August and 14 of the students continued to the next phase, where they received about 10,000-12,000 oyster seeds and then the state provided different gear types such as floating and long line systems,” says Grice. “Then at the end of it, when they’ve grown out to market size, they can move them on to a lease of their own or they can sell them to a processor after starting their commercial operation.”

Dr. Bill Walton of the Auburn University Shellfish Lab and Jason Rider of the Mississippi Department of Marine Resources showing oyster seed to the class.

The first class’s oysters are due for harvest as of press time. Not all members of the first class advanced to the second phase, but the goal of the course is not to have every single student start a farm but to give them the tools to help them make informed decisions.

“We’d rather the students decide the industry is not for them rather than try to make a go of it even if their heart isn’t in it. It can be very expensive to get a farm started and working on the open water is not for everyone,” says Grice. “Dr Walton tells them in the first class, ‘it’s okay if you don’t pursue this.’ That’s good to understand. If you go through this and you learn and you understand that it’s not for you because of expense or because it’s a lot of work and there’s a significant amount of risk, then that’s ok.”

Interest in the course was very high and attracted a wide variety of potential farmers: male and female, young and old, seasoned waterfront workers and people with no experience at all. Some students sought to supplement their existing work in crabbing or shrimping or other fisheries. The class included some restaurant owners as well.

“But one thing I noticed about the people that were in the class, they’re all very sincere about their community of the local fishery there, the cultural history and a sense of place, what the oyster industry and the history means to Mississippi,” says Grice.

The next class is likely to begin in early Spring, as that is when the waters of the Gulf of Mexico warm up, and the hatcheries are brought back online. Registration for the second class will be announced soon.

This project was paid for (in part) with federal funding from the Department of the Treasury under the Resources and Ecosystems Sustainability, Tourist Opportunities, and Revived Economies of the Gulf Coast States Act of 2012 (RESTORE Act).

The statements, findings, conclusions, and recommendations are those of the author(s) and do not necessarily reflect the views of the Department of the Treasury.