Is Camelina a potential source of omega-3 lipids? 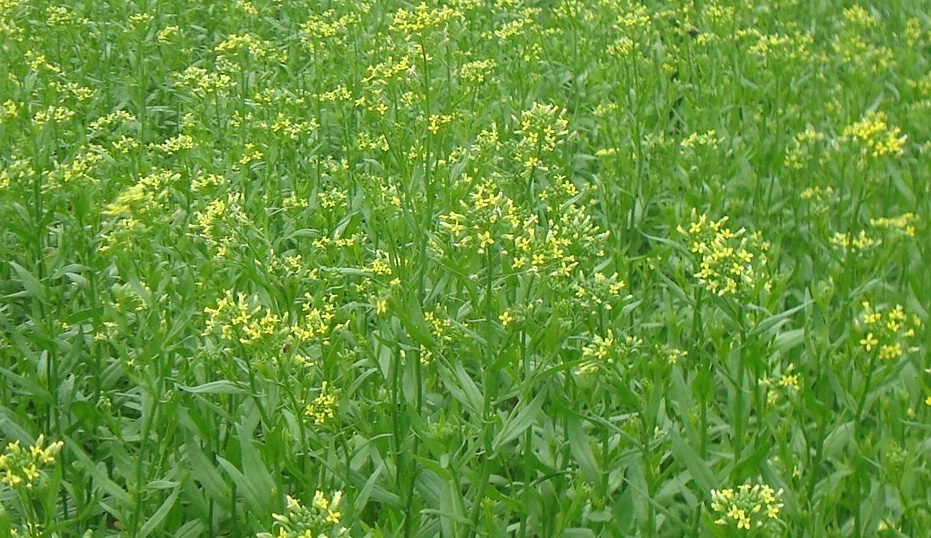 Photo: Yunfei Jiang Research is underway in Canada to explore the potential of Camelina as an alternative source of lipids and protein in fish diets.

Camelina sativa is a flowering plant in the family Brassicaceae, sometimes referred to as false flax. It is native to Europe and Central Asia and was introduced to North America, likely as a passenger with flax.

It is cultivated here for its seeds, which naturally contain up to 40% lipid and 38% protein. The oil contains high concentrations of omega-3 poly-unsaturated fatty acids and linolenic acid, and the meal contains several amino acids.

Work is going on in Canada to explore the potential of Camelina as an alternative source of lipids and protein in fish diets: At the Aquaculture Association of Canada meetings held in St Andrews NB last June four papers were presented that described experiments evaluating diets containing camelina oil and/or meal.

The first was by C.L. Ye from the Truro, Nova Scotia campus of Dalhousie University and his colleagues D.M. Anderson and S.P. Lall. Their study compared the performance of salmon parr (initial weight: 8.4g) fed graded levels of camelina oil (CO) and solvent-extracted camelina meal (SECM). Fish were fed control, 5, 10, 15 or 20% SECM, or 50% and 100% CO substitutes for fish oil in their diets for 16 weeks. Average final weight was 46.7g. Condition factor, feed conversion ratio and hepatosomatic index were similar across all groups (p>0.05). Feed consumption and specific growth rates were similar between control and all other groups but were higher in fish fed CO than in those fed SECM (p<0.05). Carcass protein, fat and ash were unaffected at week 16. Protein retention by fish fed 50% CO was higher than in fish fed 10 or 15% SECM diets (p<0.05).

Generally, the authors found that camelina by-products had no adverse effects on growth, but recommended that gut health be monitored when using over 10% SECM.

The second paper, presented by S. Hickson from Memorial University, Newfoundland and co-authored by C. Parrish, M. Rise and D. Anderson examined the efficacy of camelina meal and oil in the diets of farmed salmonids and Atlantic cod. Growth and tissue composition of Atlantic salmon, rainbow trout and Atlantic cod were compared after feeding diets with either: a) camelina oil as a full replacement of fish oil, or b) graded levels of camelina meal as a protein source.

Growth of the salmonids was generally unaffected by consuming camelina oil; however, cod fed camelina oil gained less weight and grew at a slower rate than cod fed a fish oil diet (p < 0.05).

Including 14% camelina meal in the diet did not affect growth of rainbow trout; but, diets containing 8% camelina meal for salmon, and 15% for cod. significantly depressed growth. The camelina oil significantly altered tissue lipid and fatty acid composition of all species; however, the salmonids were able to synthesize ~25% of their own long chain ω-3 polyunsaturated fatty acids, as determined by mass balance and stable isotope methods. Camelina meal generally did not affect tissue lipid, fatty acid and amino acid composition in the salmonids.

The third paper, presented by M. Booman, also from Memorial University, with co-authors Q. Xu and M.L. Rise, described the effect of dietary camelina oil and meal on the expression of genes involved in the immune response of Atlantic cod and Atlantic salmon. Juvenile cod and salmon smolts were fed fish-oil-based control diets, or one of a group of test diets containing different amounts of camelina oil or a combination of camelina oil and meal. The fish were then injected with viral mimic pIC (cod) or formalin-killed Aeromonas salmonicida (salmon). Spleen transcriptome analyses were used to investigate the effects of the diets on basal immunity (pre-injection) and on the response to the immune stimulation. Fish on all the diets, with and without camelina, showed strong gene expression responses to immune stimulation, with only modest differences limited to a few immune-related genes.

Finally J. Lu from Dal’s Truro campus presented work by his c-worker D.M. Anderson, and colleagues S.P. Lall and S.M. Tibbetts from NRC Halifax, on the use of diets containing camelina meal and –oil on first feeding rainbow trout (Oncorhynchus mykiss). Such fish have high growth rates and are sensitive to dietary changes. The fish (initial mean body weight = 0.105 g) were fed for 16 weeks with one of ten experimental diets containing 0, 6, 12, or 18% camelina solvent extract meal (SEM) or protein concentrate (PC) or with 50 or 100% replacement of fish oil with camelina oil (CO).

After six weeks, the fish fed 0%SECM, 0%PC and 6%PC showed similar growth with an approximately 15-fold gain in body weight: significantly higher than that of fish fed 12 and 18% SECM or PC diets. Feed consumption was closely related to weight gain, indicating reduced feed palatability with increasing concentration of SECM or PC. Weight gain was not affected by 50% dietary replacement of fish oil by CO, but was significantly reduced by 100% replacement. The overall mortality rate was 6.7%.

And there is more: Recent work in the UK has yielded a genetically-engineered variety of Camelina containing algal genes that encode the omega-3 biosynthetic pathway to produce an oil containing more than 20% eicosapentaenoic acid (EPA), an important dietary constituent for producing high quality farmed fish.

In the UK study, diets containing either fish oil (FO), wild-type camelina oil (WCO) or EPA-camelina oil (ECO) as sole lipid sources were formulated and fed to Atlantic salmon (Salmon salar) post-smolts for seven weeks. All the fish more than doubled their weight and none died. Fish fed the ECO diet showed a higher weight gain than those fed the FO diet.

These experiments all show that camelina seed extracts may offer significant potential for replacement of fish meals and – oils for some species of cultivated fish, but clearly more work need to be done.

In personal correspondence Dr. Santosh Lall noted that there is some interest in producing Camelina crops in Atlantic Canada, but it is so far only at the experimental stage.

Abstracts of the four papers referenced here are available at: www.aquacultureassociation.ca/assets/PDFs/AC14-Abstracts-by-Session.pdf