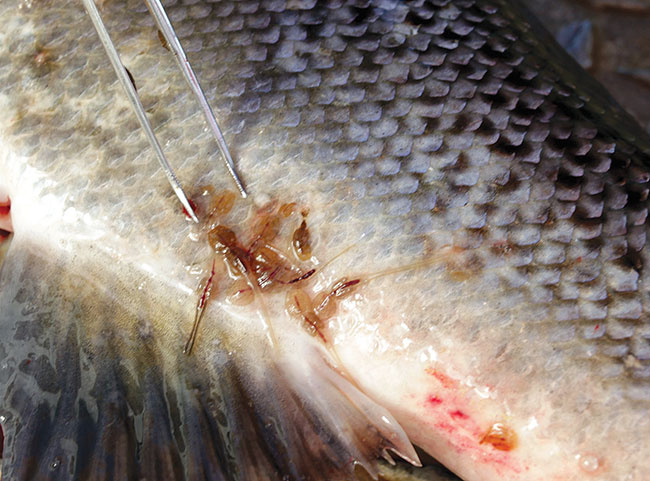 Sea lice (pictured) remain the most critical biological challenge for the salmon industry but emerging parasites should not be overlooked, says an expert. (Photo: DFO)

The industry should not overlook emerging parasites even as it is taking steps to tackle one of biggest threats to the high-value salmon sector, sea lice, says a parasitologist.

Dr. Ian Bricknell, professor of Aquaculture Biology at the University of Maine, says emerging parasites aren’t heard of much because they affect lower-value aquaculture species; the countries where they’re seen do not have robust fish-health monitoring; and also likely because of lack of funding to study them.

“Many freshwater species have a lower economic value and, therefore, they don’t make the Top 10 of economic thresholds that get fish farmers and the economy to take notice of them,” he said at the virtual International Sea Lice Conference hosted by Faroe Islands aquaculture research firm Fiskaaling in September.

He says his online search of the keywords “parasitic copepods and aquaculture” has turned up 190 papers published over the last 40 years; a meagre figure compared with the 1,500 research papers that turned up when he searched for “sea lice.”

Of the 190 papers, 87 were dealing with freshwater copepods and the 103 were on marine copepods, he said.

There are compelling reasons to keep emerging parasites on the industry’s radar. A study from the National Research Council of Canada says parasitic copepods’ importance as disease-causing agents has become evident with the development of semi-intensive and intensive aquaculture.

“There are some estimates that US$0.90 is spent in sea lice control per kilogram of farmed salmon. It is considered to be the number one economic cost to aquaculture worldwide mainly because of the high value of Atlantic salmon.”

He named white spot, saprolegnia and gyrodactylus as the top three parasites following Lepeophtheirus salmonis and Caligus rogercresseyi in terms of impact on aquaculture.

“Parasites can affect a host fitness and survival. Most organisms live with parasites. They can cause a slight inconvenience, a slight loss of fitness, but then as they increase, they may start causing welfare issues to animals that may go into clinical disease and ultimately lead to the animal’s death. Those outcomes occur in both wild and farmed fish.”

“Prevention is better than cure,” he said. “We should be keeping an eye on these emerging trends within sea lice in aquaculture in both freshwater and marine because if we don’t, we’re going to be super busy firefighting these emerging species, just like we ended up with Lepeophtheirus salmonis and Caligus rogercresseyi  back in the 70s and 80s.”

Based in the Faroe Islands , the International Sea Lice Conference is the major forum of sea lice research. The next conference will be held in in Tórshavn, Faroe Islands on 9-13 May 2022.