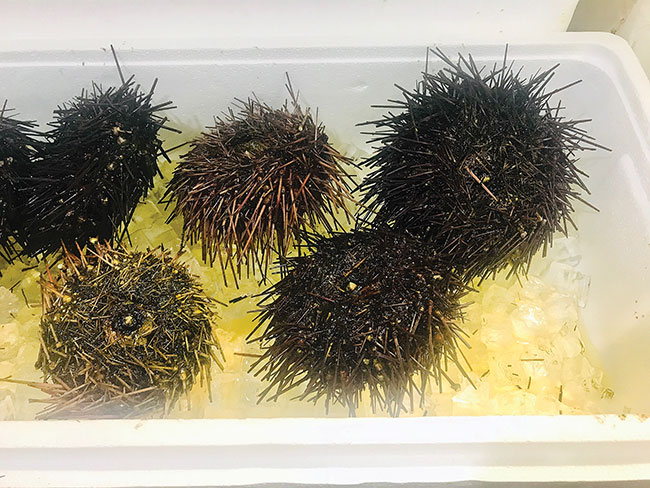 Sea urchins sold at an Oriental market in Vancouver for $10 each Photo: Liza Mayer

When Maine seaweed farmer Sara Redmond was looking for an auxiliary crop to raise alongside her seaweed, one candidate was immediately obvious: sea urchin.

In Redmond’s situation, the species (Strongylocentrotus droebachiensis) ticks all the right boxes: the source of free sea urchin seed – the University of Maine Center for Cooperative Aquaculture Research Hatchery – is just down the road from where she lives; her lease on Stave Island in Frenchman Bay in Gouldsboro is uniquely sited in over a 100-feet deep water; and more importantly, it fits in with her existing activities.

“There’s an opportunity to take advantage of that valuable space that I’m leasing in the ocean and add a couple of multi-year crops as long it doesn’t require a tremendous amount of extra labor. I can tend to them as I tend to my seaweed,” she says.

The plan is to grow anywhere from 1,000 to 70,000 sea urchins in up to 925 deep-water nets. Stocking density is 10 to 12 urchins per tier in a seven-tier lantern net. The initial venture will be experimental in scale but she plans to go commercial if it proves successful.

Redmond is behind Springtime Seaweed, which grows certified-organic kelp and processes it into dried flakes and powders for the ingredient market. Kelp is sea urchin’s preferred food; it is abundant and free at the farm.

“I am hoping that we can create a system that will produce such a high-quality urchin that would interest high-end customers in Japan,” she says. “I think what’s really exciting about cultivating your own seafood is that you have an opportunity to improve the quality and the flavor. We’ve been working on cultivating a wide range of seaweed species. So if you can feed your urchins a certain blend of seaweed, those seaweeds will impart the flavors in uni (gonad). I’m really excited about the potential to create like a very high-quality uni with flavors that can be consistent.”

Redmond chose American oyster (Crassostrea virginica) as a second supplementary crop. With oysters typically grown in shallow water, she will grow them initially on an experimental basis to see how they’ll do in waters more than 20-feet deep. The plan is to grow up to 35,000 oysters in up to 50 seven-tier lantern nets suspended from deep longlines.

Redmond expects to reap a “really nice data set” this year and next from the new ventures. “Then we (alongside CCAR hatchery) are going to create a training program so that we can go out and share with other farmers the results from our work on how they might be able to integrate them into their farm,” she said.