But pandemic shows it might be time to change tack 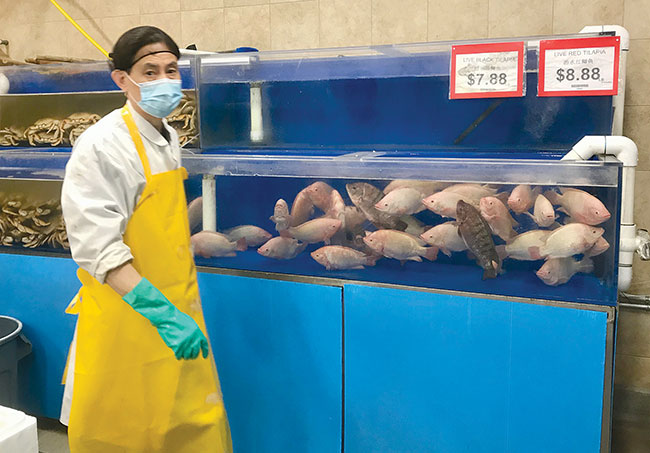 Blue Ridge Aquaculture supplies live tilapia that are kept live up to the point of purchase by the consumer, like these at a Walmart store

Virginia-based Blue Ridge Aquaculture saw sales drop by an average of 20 per cent when the pandemic broke out in March. At that time, owner and company president Bill Martin expected further contraction down the road, by as much as 40 per cent. That projection did not materialize.

Seafood sales in retail markets trended up as families looked for healthy meals to cook at home during lockdown. “March was our low month,” acknowledged Martin Gardner, vice-president, business development.

“We did see about a 20-per-cent reduction in sales but they slowly rose back to our historic norms. Right now we’re about three per cent off of our historic top sales month over month. 2019 was a historic year for us. I’d say we’re closer to 10 per cent down from our historic year today.”

Blue Ridge is the world’s largest producer of indoor-raised tilapia. It sells 90,000 to 100,000 live fish a week to markets in Northeastern United States and parts of Canada.

The fish are live up to the point of purchase by the consumer. The consumer chooses a live tilapia from the tank and the store guts it for them.

Being in this specialised market, Blue Ridge’s experience is different than what the rest of the seafood industry is experiencing, said Gardner. “We sell through distributors and they sell to seafood stores and restaurants, but mostly to seafood retail stores.” 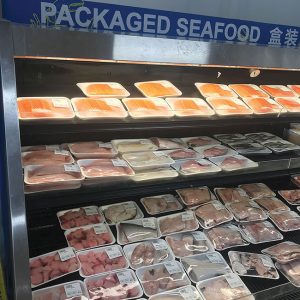 The company is likely to expedite its entry into the processed fish category (above) after seeing how producers with varied product formats fare better in the pandemic Top photos: Liza Mayer 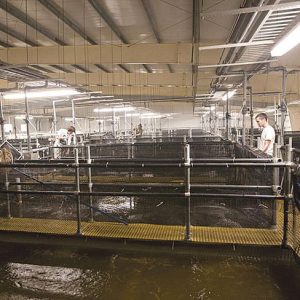 Blue Ridge also serves a very specific clientele: Asian Americans. They account for 95 per cent of its market.

Gardner traces this cultural preference to the time before home refrigeration became the norm – a time when buying live product was a guarantee of freshness.

“Obviously that’s not the case anymore but the cultural preference is still there. The consumers can see the fish, they can see that the fish doesn’t have lesions or fin erosion or it’s still vibrant and very much alive. It’s also a guarantee that the product wasn’t imported. I think there’s some concerns that imported product wouldn’t be as high quality as domestic product,” he said.

The company has a highly integrated operation. It has everything in house – from the broodstock that lays the eggs to the feed that nourish the grow-outs. This has also markedly reduced the pandemic’s impact because having all facets of operation within its control ensured biosecurity as well as stability when COVID disrupted the supply chains.

In 2017, when the company started producing its own feed, its goal was to cut costs on the biggest expense in fish production. A surprise benefit, realized during this time of crisis, was that an in-house feed mill provides it the flexibility so that fish production could accompany market swings.

Explains Gardner: “Instead of culling fish, we have the ability to slow the growth down through the nutritional formulations of our feed. We can speed them up or slow them down with the nutrition. Having your own feed mill is the only way you can really do that.”

While the company’s niche market helped cushion the impact of market disruptions, it highlighted lessons that the company can apply moving forward. Among these, Gardner said, are the opportunities to produce seafood products that have “wider appeal” for the domestic market.

“The fresh fillet market becomes more attractive to us as we see the pandemic and see the domestic consumers more interested in local production. We’re uniquely capable of being able to address that.

“It also provided an understanding that the seafood producers that are in the fresh markets that had flexibility to switch between retail and food service and vice versa fared so much better than those that had a very specific product form and a very specific distribution or customer base.”

The lockdown provided the opportunity to fortify an expansion plan that’s been in the works for the past 10 years, he said. “The feed mill, broodstock program, and the expansion of our management staff were certainly a part of that expansion plan. Positioning this company for expansion into the fresh fillet business is also a part of that plan.”

Gardner said the challenge over the past five years has been that Blue Ridge is at full production capacity. “So we haven’t really had the chance to expand in a new markets. But this is a good problem to have.”

Related
Lessons from a pandemic: We need domestic aquaculture as never before
How aquaculture changed these Newfoundland communities
Leadership through crisis – It’s time to take charge
Oyster farmers struggling as COVID-19 continues to impact restaurant industry