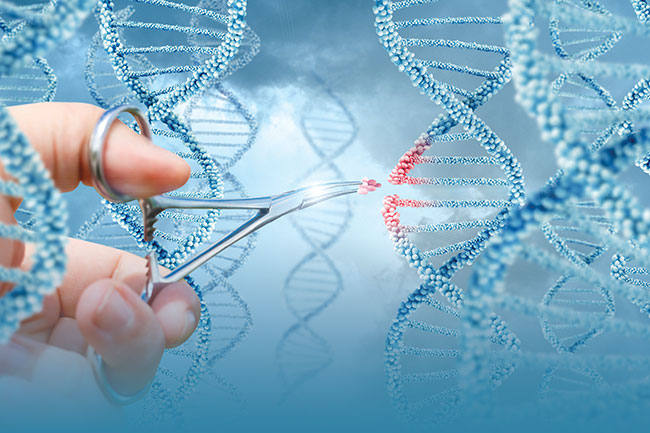 CRISPR/Cas9 is dubbed as one of gene technology’s ‘sharpest tools.’ The so-called ‘genetic scissors’ is being explored as a potential tool in the fight against sea lice Photo: ©natali_mis / Adobe Stock

What do non-browning mushrooms, wheat plants with larger grains, and lawn grasses that need less-frequent mowing have in common? Answer: they have all been successfully altered using a new gene-editing technique called CRISPR/Cas9.

An international initiative led by researchers in Norway is exploring the Nobel-Prize-winning technique to try and build seal lice resistance into Atlantic salmon. But what’s the difference between gene editing and genetic modification? A professor of plant science at the University of Connecticut has a user-friendly explanation:

“‘Genetically modified’ refers to plants and animals that have been altered in a way that wouldn’t have arisen naturally through evolution,” Dr Yi Li, wrote in The Conversation. “A very obvious example of this involves transferring a gene from one species to another to endow the organism with a new trait – like pest resistance or drought tolerance.”

But in genetic editing, there is no such “cutting and pasting” of genes. Instead, genetic editing involves directly rewriting the organism’s genetic code, says Li, the plant geneticist. He suggested that CRISPR/Cas9 is considered as a good alternative and less controversial than genetic modification.

But first, the research team comprised of scientists from Norway’s Nofima, the United Kingdom, the United States, Canada, Sweden and Australia, need to uncover the genetic basis why several species of Pacific salmon are unattractive as hosts for sea lice. This knowledge might be useful in preventing sea lice infestation among farmed Atlantic salmon, they said.

“If we can reveal the differences in the genetic code that cause lice to be attracted to Atlantic salmon, or that makes the skin of North American salmon a bad place for sea lice to settle and develop, then it may be possible for us to use that information to make Atlantic salmon resistant to sea lice, and have better health,” says Nick Robinson, Nofima senior researcher and project leader.

CRISPR/Cas9 is seen as transformative for the industry, which spends an estimated at $1 in treatments, per kilogram of farmed salmon.  “It is no exaggeration to say that the knowledge we create in this new project could transform the Norwegian aquaculture industry (and the world’s) if Atlantic salmon can be made to be highly or completely resistant to lice,” says Robinson.