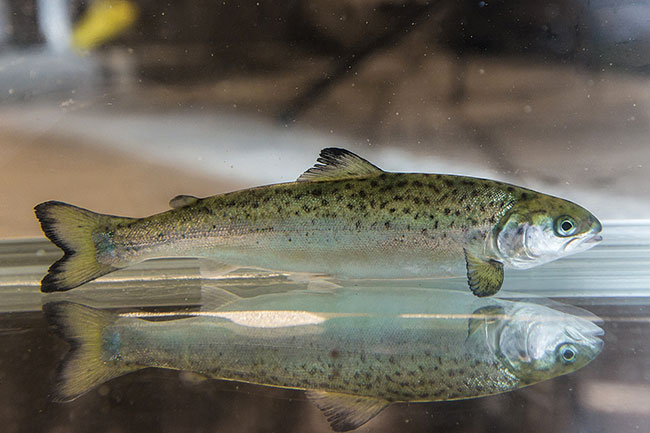 The building boom sweeping the aquaculture industry is by no means a measure of the success of recirculating aquaculture technology (RAS). But as the industry watches with interest whether the technology will deliver on sustainability and profitability, some remain firmly on the side of net pen farming as the most environmentally friendly and cost-effective way of producing salmon. Is there, perhaps, a happy middle ground?

One practice that’s beginning to happen now in Norway and could be more widespread over the next several years is raising smolts longer in land-based facilities before moving them to ocean cages, where they will grow to market size.

In Newfoundland and Labrador, “post-smolts will be grown larger on land than they have in the past,” said Mark Lane, executive director of the Newfoundland Aquaculture Industry Association (NAIA). “By growing our fish larger (in land-based facilities), we can limit the time that they spend in the salt water. Our water temperatures are pretty cold in comparison to other jurisdictions. Our fish currently spend two winters at sea. We are working toward reducing that time.” The additional investment being poured into existing and new hatcheries in the province would help advance the plan, added Lane.

Moving bigger fish and growing them in a much shorter cycle in seawater reduces the footprint of salmon farming, commented Frode Mathisen, director of freshwater production at Grieg Seafood BC Ltd. Extending smolts’ stay in land-based facilities, for instance, by three to four months typically means cutting down their stay in sea cages by the same length of time.

“I would even say it’s actually perhaps the most sustainable way of doing it because you’re utilizing RAS efficiency on land for a longer time, you don’t have to do it for the whole cycle,” says Mathisen. “Knowing so well how much it costs to do it on land, I think partial RAS is the most efficient way both economically and environmentally. To do RAS the whole way uses a lot of energy and a lot of water. It sounds very good on paper, but I’m a little bit skeptical. I think it’s better to do it in combination.”

Mathisen foresees the trend getting picked up “basically everywhere you have salmon production in the sea.” However, the adoption of the practice in other salmon farming jurisdictions would need the support of the local regulators because it changes the typical management plan. In British Columbia, “we haven’t gone as far as in Norway but we are starting to look into it,” he adds.

John Paul Fraser, executive director of the BC Salmon Farmers Association, confirmed the industry continues to investigate growing smolts longer and larger in hatcheries. “Research and development in all aspects of aquaculture has driven our industry forward over the last three decades, and raising smolts in land-based hatcheries has been no exception,” he said.