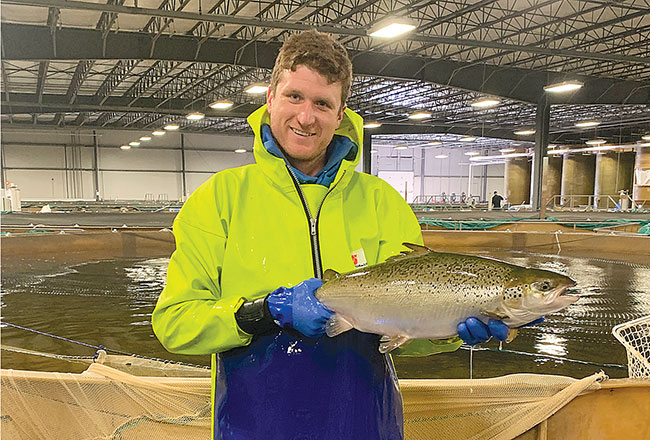 AquaBounty staff Peter Bowyer holding a non-GM salmon from the company’s initial harvest of 10,000 lbs in the United States in June Photo: AquaBounty

AquaBounty Technologies harvested its first crop of conventional (non-genetically modified) Atlantic salmon at its US land-based aquaculture facility in June, a milestone the company says confirms recirculating aquaculture system (RAS) as an “efficient and sustainable way” of raising Atlantic salmon.

The company known for developing the world’s first genetically modified salmon raised non-GM salmon at its Indiana facility as a stop-gap measure while the importation of GM salmon eggs into the US was banned. The Food and Drug Administration has lifted that ban in March 2019.

The first harvest of 10,000 lbs is within the company’s target. This will ramp up to 25,000 lbs per week, until such time when all of the conventional salmon at the Indiana facility have been harvested by Q4 2020. Thereafter, AquaBounty will raise only GM salmon, known by the trade name, AquaAdvantage Salmon (AAS).

“The first harvest of conventional salmon represents the start of the commercialization phase for AAS, a milestone over 30 years in the making. This will be a breakthrough moment not only for AquaBounty, but for the industry — as it will be the first sale of a genetically engineered animal protein in the US,” said Sylvia Wulf, CEO of AquaBounty.

AquaBounty is planning to build another farm in the US. It will be a 10,000-MT land-based facility at a yet-unannounced location. “We believe we are now positioned to seize emerging growth opportunities within the space,” Wulf said.

The long-term plan is to have other existing RAS farmers “who wish to remain competitive in the marketplace” to also farm AAS.

“AAS salmon was really designed to grow in land-based RAS farms. Our fish was designed to operate in that kind of a system,” Wulf told this publication in an earlier interview.