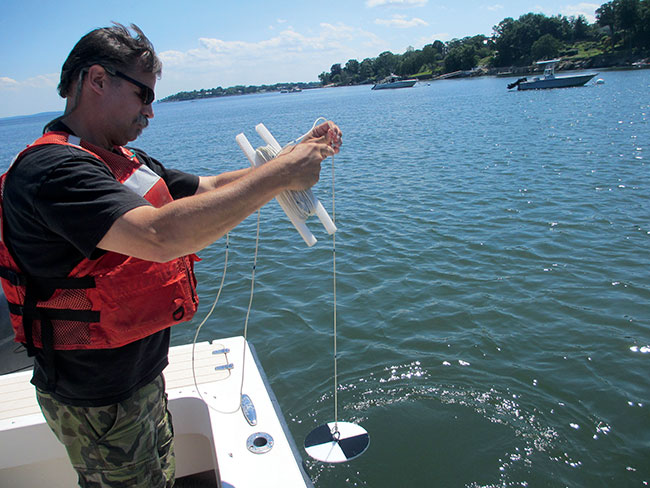 Everyone knows that an oyster filters up to 50 gallons of water per day.  But what if shellfish aren’t there to do this job?  What would it cost to remove just nitrogen with wastewater treatment improvements, septic system upgrades, and storm water management?

A “novel and transferable” study got answers from one upscale New England coastal community that worked with shellfish biologists, economists, and modelers from National Oceanic and Atmospheric Administration (NOAA) and Stony Brook University to quantify the benefits.  The final calculation: $2.8 to $5.8 million per year.

“Nitrogen remediation is just the tip of the iceberg — but still appreciable at the municipal level,” said Gary Wikfors, a study co-author and chief of the Aquaculture Sustainability Branch at NOAA’s Northeast Fisheries Science Center.

For the study, two local shellfish growers, Atlantic Clam Farms and Stella Mar Oysters, provided data on their annual shellfish harvest and local aquaculture practices. (Both the hard clams and eastern oysters are bottom-grown in the Long Island Sound.)

Scientists applied the expected nitrogen content sequestered in their tissues and shells to the number of animals harvested.

To put a dollar value on the nitrogen removal service by the shellfish, the study pursued two approaches: a formula from an existing nutrient trading program and an estimate of what it would cost to achieve the same result with human-engineered approaches.

“Nonpoint source input is often more challenging and expensive to reduce than point source input, requiring a multifaceted strategy,” according to NOAA Northeast Fisheries.  But that’s where shellfish shine.

The study, which appeared in Environmental Science and Technology and was publicized in the Greenwich Free Press, holds insights for aquaculture proponents and municipalities alike.

Says Wikfors, “When I was thinking about valuation of these ecosystem services, I thought it might lead to money for growers.  But they told me, ‘We don’t actually want the money. We want to make this contribution to our communities in return for social license to farm.’”

Related
Scientists see role for robots in mariculture
Landmark rule to boost offshore fish farming in the US
Advances in US sablefish aquaculture
From the Editor: Life lessons from a heat wave
Women
More Women Stories
Editor’s Picks