Advances in US sablefish aquaculture

The National Oceanic and Atmospheric Administration (NOAA) reached a milestone in May with its first harvest of an all-female generation of mature sablefish. This is a landmark achievement as it makes the farming of this tasty, buttery fish on a commercial scale within the grasp of US fish farmers. The fish harvested weighed an average of 5.47 lbs each, for a total of a whopping 20,227 kgs (roughly 44,593 lbs). 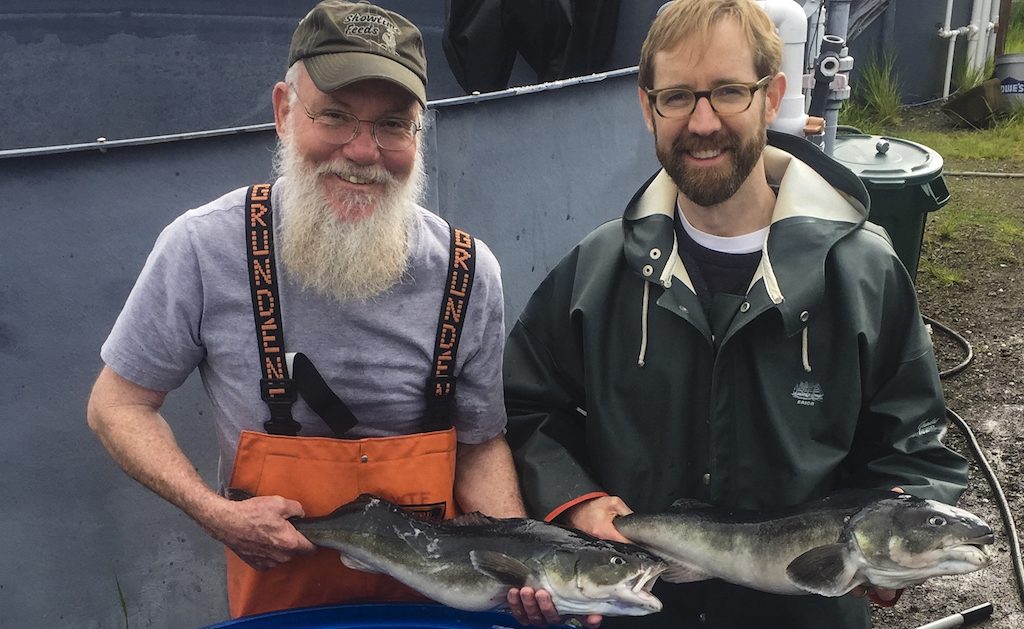 Despite the encouraging outcomes achieved

“That average size is akin to a 10-year-old fish in the wild,” remarked an astonished Kurt Grinnell of Jamestown S’Klallam LLC, owned by the S’Klallam tribe in Washington State and a partner on the research project with NOAA. Grinnell was very happy with the harvest, with low mortality rates similar to cultured salmon species. He sees “a big yield from a small space because sablefish is a hearty species that can withstand low-oxygen conditions and large temperature changes.”

The harvest marks the culmination of efforts of researchers at NOAA’s Northwest Fisheries Science Center in Seattle, who, in 2015 succeeded in producing a genetically all-female generation of sablefish (Anoplopoma fimbria). Females grow faster than males and are up to 30-percent larger at 24 months in aquaculture environments. Since then, scientists Adam Luckenbach and Bill Fairgrieve have been raising this generation of sablefish at facilities in Manchester, Washington (Hatchery International, Issue 5 “All Females, All the Time”).

The scientists produce approximately 10,000 all-female juveniles each year for grow out in net pens in open water. They have the potential to produce more juveniles, a capability that’s ideal in farming an emerging aquaculture species on commercial scale. The problem, however, is the limited number of permits for net pens in open water, where these juveniles would be raised to maturity. The permits issued by the federal government are already being used to grow non-native fish species in the Puget Sound region. One company, Cook Aquaculture, owns the majority of net-pen permits and is using them to raise Atlantic salmon. NOAA is working on the permitting process for sablefish.

Sablefish, or black cod, has caught the public’s attention with its rich buttery flavor and healthy omega-3 fatty acids. Current wild stock numbers are unknown, but fishing is closely regulated by federal agencies. The controls on fishing have helped drive prices up. Earlier this year, prices were up roughly 11.5 percent from a year earlier — from $10 per lb at wholesale in 2015 to now $12.25 per lb — for fish 10 lbs or larger. Sablefish continues to be the highest valued finfish per pound in Alaska. The largest consumer of sablefish is Japan.

NOAA is providing a Texas-based aquaculture company, Global Blue Technologies, with about 7,000 fry (each weighing 0.5 grams on average) annually. Still in the development stage, Global Blue hopes to grow sablefish commercially in their indoor recirculating aquaculture system (RAS).  Their goal is “to meet increasing consumer demand while decreasing fishing pressures on wild stock,” states their website. Black cod is the company’s first choice of species to showcase a commercially indoor-raised fish using RAS. In May, they introduced their product to chefs, university researchers, and government officials in Portland, Oregon, where it well received. The fish was tasty enough for sushi chefs to request Global Blue to harvest smaller sablefish — weighing 400-500 grams instead of 2,000 grams or larger — for the sushi/sashimi market.

The Jamestown S’Klallam tribe continues to work with NOAA and the University of Washington, with funding from Sea Grant, on how to best optimize sablefish grow-out. Success in commercial-scale farming of sablefish means jobs and income opportunities for the tribe.

Outside the US, Golden Eagle in Canada has capitalized on the growing demand for sablefish. The company raises its own stocks in net pens off Vancouver Island. They are the only international provider of cultured sablefish so far.

Researchers and growers are careful to note that for now, this emerging aquaculture venture is not meant to replace wild-caught sablefish, or even compete with wild stocks.  Instead they see it as a way to help take pressure off the limited wild stocks and supplement market supply when fishing season is over. Luckenbach also sees the benefits of farming locally, rather than “bringing in fish from other countries where we don’t know the rearing history or treatments used on the fish.”

NOAA’s research strives to create a sustainable, non-GMO, flavorful product with maximum growth potential while limiting environmental impacts. Sablefish aquaculture ticks all the boxes for sustainability: it is a species native to the Pacific Coast; the eggs are taken from wild, parasite- and disease-free stock; and there’s little to no discharge from feeding in net pens.

A further step in this direction are Fairgrieve’s efforts to develop a diet similar to natural food sources and leaves little to no waste behind after feeding. Luckenbach is also working with the University of Maryland to produce a reproductively sterile sablefish to mitigate risks of crossbreeding with wild populations.

“In the 80s, we saw a big push for aquaculture in the US, but rising costs and other setbacks have left us no longer at the forefront of development and industry,” says Kurt Grinnell of S’Klallam Jamestown LLC, a partner on the research grant with NOAA. He sees hope for aquaculture in the advances that NOAA achieved.