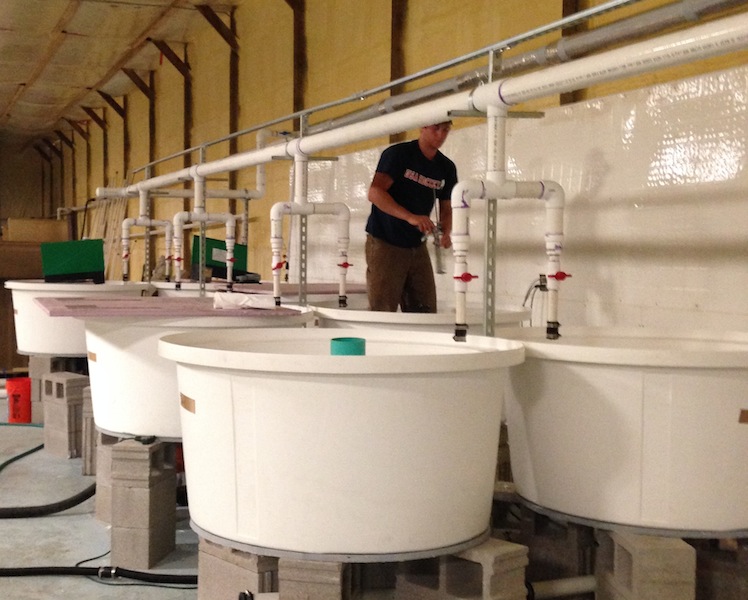 Two brothers in Wisconsin start an aquaponic fish and vegetable farm as an alternative to the wild fishery.

Care of the planet has affected every business decision Wisconsin brothers Schuyler and Brandon Pigott have made. Their family business, Nucon, founded in 1985, designed, developed, and manufactured plastic products made from recycled materials. (They recycled approximately 25 million pounds of plastic annually, before selling the company in 2002.)

The brothers then founded Great Northern Development. Based on their philosophy to give back, they began work with a neighbourhood in Racine, rebuilding derelict houses.

Their latest venture is AquaTerra Farms an aquaponic fish and vegetable farm. Schuyler was inspired to think of alternatives to the wild fishery when a captain he worked with, talked about overfished, polluted oceans and the need to feed a growing population with healthy fish.

Well, they’re now hopeful that AquaTerra will be producing some 10,000 lbs of Arctic charr a week within the next two to three years.

Why arctic charr over tilapia? They will demand a premium in their target market areas of Chicago, Madison and Milwaukee.

AquaTerra farms has already converted one of three existing greenhouses intends to convert the other two hoop-style nets to their own purposes in the next year or so.

The brothers invested five years of research into the aquaponics concept with the cooperation and assistance of the Northern Aquaculture Demonstration Facility at the University of Wisconsin in Stevens Point.

The farm is set up to recycle and use water taken from a 12-foot artesian well that is about 52°F and flows at a rate of about seven gallons a minute. It’s treated through a sand filter and recycled through the hydroponic vegetable grow beds.

Pigott said that while 52°F is a good temperature for the charr, the water will have to be chilled somewhat for the cold-water fish in the summer.

So far they have installed 14 eight-foot fish tanks that are seven feet deep, plus 10 four-footers, and are in the process of installing four or five 15-footers.

This set-up will be duplicated in the next two greenhouses, said Pigott, adding that all three units are about 150 feet long and 30 feet wide, all to be fitted with special screens to keep bad bugs out and good ones in.

Pigott also noted that the company has also begun the roughly two-year process of developing its own hatchery and broodstock program and will incubate about 250,000 eggs from commercial hatcheries inside and outside the US.

Asked about how much the operation had cost to set up to date, Pigott admitted it was more than anticipated. But it’s all in the family… Brandon Pigott’s daughter, Quinn, is account executive and corporate manager and Dane Pigott is operations manager.

He said though, with some pleasure, that one of the best aspects of an aquaponics farm is that the fish and the vegetables work to reduce the carbon footprint of the other, in a fully controlled, organic environment.