The changing face of aquaculture conferences 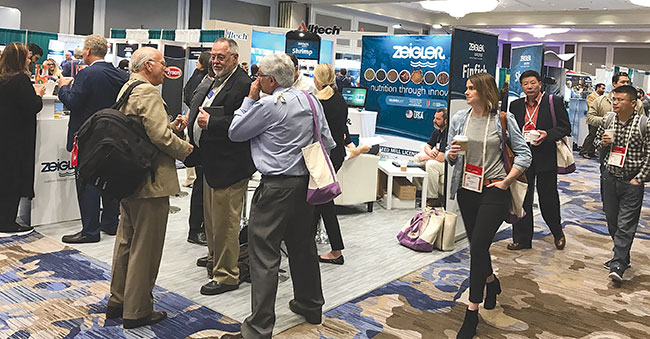 Change is inevitable; however, evaluating the pros and cons of changes often depends on the perspective of the individual who assesses the benefits versus the costs and problems created by the changes. Some people embrace change and point out the fact that without change there is no progress. On the other hand, many people find change to be very uncomfortable and agree with the 95-year-old North Woods codger who had been asked about the changes he had seen over the years: “Yep, I’ve seen a lot a changes in my lifetime and I been against every one of them.”

I have attended aquaculture conferences for roughly 40 years and seen substantial changes in the number of attendees, the content of the technical presentations, and the nature of the trade shows. Most of the changes can be, in my opinion, considered to be progress, but a few have been problematic for me. As I and other members of the aquaculture community look forward to Aquaculture America 2020 in Honolulu, we can expect relatively few changes, other than some focus on Hawaiian culture and aquaculture, from the last Aquaculture America conference in Las Vegas. Viewed in a longer perspective, a comparison with the Aquaculture ‘95 Triennial Conference in San Diego shows substantial changes have occurred in the aquaculture conferences held in the United States.

Looking back
In the 1980s and early 1990s fish farming organizations, such as Trout Farmers, or Catfish Farmers, or Shellfisheries held annual meetings for their members and selected guests from government and/or academia. The Fish Culture Section of the American Fisheries Society, and the World Mariculture Society (forerunner to the World Aquaculture Society) held conferences that stretched across multiple species and aquaculture issues, and were attended primarily by academicians and government workers connected to state and federal fish hatcheries. Very few private sector fish farmers attended these science and technology focused conferences. The need for conferences that brought producers, researchers, regulators, and government officials together to hear presentations and discuss matters of common interest was recognized, but progress toward such conferences was slow. Perhaps Dr Nick Parker’s visionary concept of an “Intergalactic Aquaculture Conference” in which all aquaculture organizations would participate every third year provided the impetus for conferences designed to bring together the various interest groups. The conferences now known as “The Triennial” started to take shape in the 1980s through cooperative efforts by the World Aquaculture Society, the National Shellfisheries Association, and the Fish Culture Section of the American Fisheries Society. Species-focused producer organizations and their associated partners, such as the Aquaculture Suppliers Association, were starting to become involved, but were still largely peripheral.

By 1995 the National Aquaculture Association (NAA) was established to provide a voice for all forms of private sector commercial aquaculture. Joe McCraren, an old colleague and friend of mine, was the executive director. As the chair for Aquaculture ‘95, I presided over the first aquaculture conference held in San Diego. Joe and I, with the cooperation of Dr Sandra Shumway (NSA), Dr Joe Tomasso (WAS) and the conference management skills of John Cooksey, newly hired at that time as conference manager, saw an opportunity to bring the vision of Nick Parker to fruition. We would organize a conference that addressed the interests and issues of producers, academicians, government officials, industry suppliers, and state/federal hatchery personnel in one major conference. Approximately 4,000 attendees supported the concept. The program focused on the broad, across-the-board topics of current interest to fish farmers and their academic and government colleagues. Hosted by the California Aquaculture Association, the 1995 Triennial was a rousing success.

A guiding principle for the program of the 1995 Triennial was a limit on the number of concurrent sessions to no more than eight sessions per time slot. Topics for sessions largely reflected the interests of managers of state and federal fish hatcheries and academic researchers influenced by the needs of those hatcheries.

In contrast, Aquaculture America 2020 will have up to 14 concurrent sessions. While the 1995 program was built around broad topics and categories of animals, such as coldwater fish, nutrition, disease, salmonids, catfish, and hybrid striped bass, to name a few, the 2020 program has narrower topics that address the specific interests of producers. Subjects include technology, alternate emerging feed ingredients, aquaculture for conservation, macroalgae, functional genomics, and epigenetics, as well as old stalwart topics, such as catfish, striped bass, and fish physiology.

I think the greater role of producers (especially the National Aquaculture Association as a full partner) in aquaculture conferences is a major influence in the changing character of these conferences. The events have placed greater emphasis on the needs and interests of producers. Whether or not individual conference attendees, and/or potential attendees like the changes over the last 25 years depends on the interests and viewpoints of each individual. The changes seem to have exceeded the visions that Joe McCraren and I had in the early 1990s. I’m grateful for that and only wish Joe was here to enjoy the success.