Why Nordic Aquafarms is unfazed by project delay 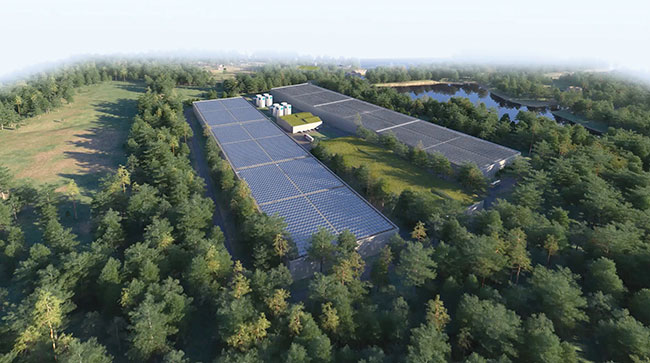 Nordic Aquafarms has yet to break ground on its land-based salmon facility in Maine but company president Erik Heim (inset) sees an opportunity in the delay Photos: Nordic Aquafarms

Erik Heim, Nordic Aquafarms president, is undaunted by delay in the construction of the company’s land-based salmon farm in Belfast, Maine.

The first phase of the $400-million facility was expected to begin in 2019, but for Heim, working to make sure all the I’s are dotted and the T’s are crossed is more important than rushing to build.

“There’s a lot of different factors that come into play that can influence a process and take it different directions along the way,” says Heim. “We’ve been through this in Denmark and Norway as well. And we’re doing it in California. We’ve done it a few times so we’re not surprised when things take a turn, so to speak.”

Heim is referring to the delays in permitting and opposition from some members of the Maine community (see related report on page 16), but he sees this as an opportunity to “keep on de-risking the project.”

Without mentioning any names, he pointed out the downsides of what happens when things are rushed.

“We’re taking things in a responsible conservative step-by-step approach. The most important thing for us is that things are in order and that we feel confident about engineering everything before we start working. That’s actually more important than rushing to do something,” he says.

Indeed, “slow and steady wins the race” appears to be Heim’s philosophy in building the company’s operations. While he agrees “economies of scale are going to matter,” how one achieves that also matters, he says.

“For example if you develop a moderate scale, say 1,000- or 2,000-MT operation, which in itself is actually quite a project, you have a four- to five-year learning cycle before you actually get results out of that facility from the time you start developing it.

“And that’s the challenge here – the learning cycles and development cycles are long. So I think the problem is, if you don’t take that stepping stone on a smaller scale which is a part of the learning curve, you’re just taking a huge risk. But if you start at a small-scale, I agree: economies of scale are going to matter like in all aquaculture. It’s just a question of how big of a risk you are willing to take on behalf of your investors to get there.”

“I think one of the consequences of some of what we’ve seen is that investors will be more picky, more careful. And that hopefully will benefit some players that have a very good foundation for succeeding while others that may have a weaker one will not get financed. So that could be a benefit of it. That increases the chances of success and potentially decreases the number of cases that might fail.”

Data from Spheric Research shows there are 160 RAS salmon projects worldwide this year, of which around 70 percent are still in conceptual stage. Heim sees a very small number of these will materialize.

“In the 10 years I’ve been in the industry, I think maybe one or four projects see the light of day. It’s been true for some time. I have always been clear: you have to have a great deal of respect for these projects; they are complex. I think history will repeat itself; quite a few of these will never see the light of day and, hopefully, a few have a really good crew on board and a good location and they can see some success.”

For potential investors, he suggests “really scrutinizing the technology, capabilities, track record really carefully because RAS is not RAS: there can be huge technological differences between facilities, there can be huge differences in experience base. Are they actually operating anything? Do they have a track record in operating when they’re starting on a big scale?  All these questions I would be looking at.”

Is going public on the horizon for Nordic Aquafarms? Heim says there’s no immediate plans for it but he is not discounting it totally. “We have had strong shareholders so we haven’t had the need to go public. As things are looking now, we don’t really see a need in the near term to do that.”

Heim is now focused on shepherding Nordic Aquafarms to the next phase of the project, which is final engineering and construction.

“It’s very different. We’ve done this a couple of times before but it requires a shift in how we work because we’re moving into a much more intensive phase when we approach construction. As we get ways down into final engineering, we will probably start announcing some dates then in terms of construction start and that will give the whole fish-in-water timeline.”