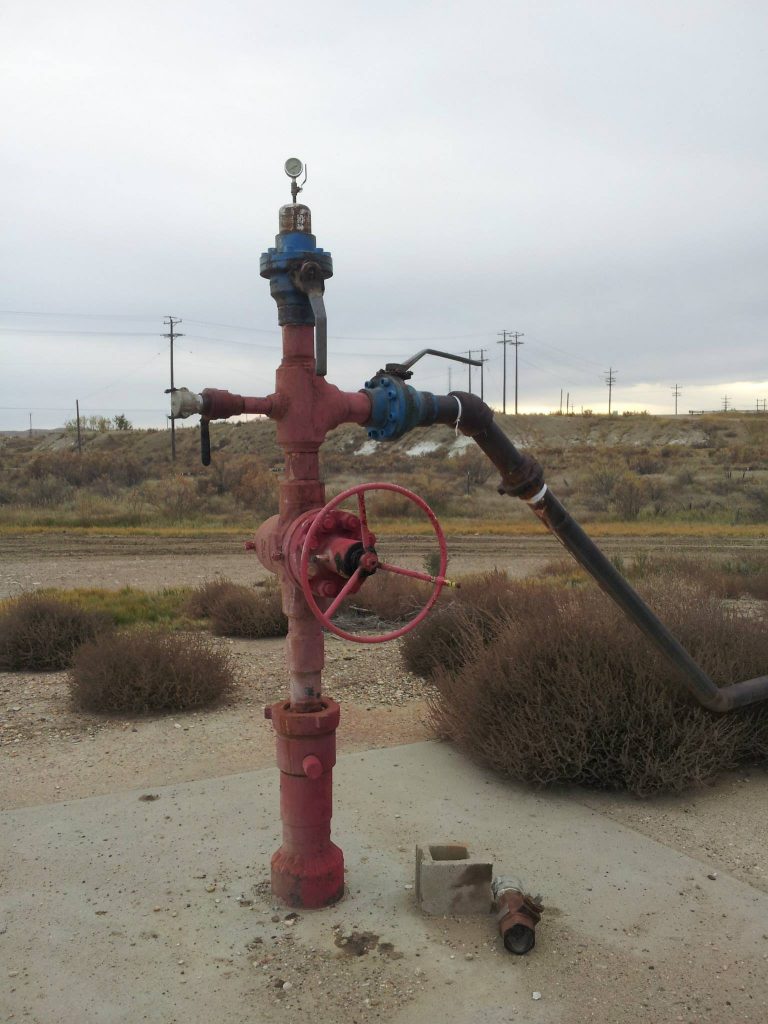 An enterprising farmer uses the warm water pumped by oil wells to grow shrimp and diversify his agriculture production.

What could a farmer do with 150°F water flowing freely at 450 gallons per minute?  Grow shrimp, says Richard Hawley of RH Farm in Casper Wyoming.

Wyoming is known as the “cowboy state,” but oil pays the bills.  Many oil wells pump warm

water as a by-product of oil extraction.  But early oil production in Wyoming captured oil that seeped out of the ground under pressure. When the oil was gone, the water continued to bubble out.  Hawley has a decommissioned well close to his property with water flowing at a rate of 50 psi.

The town actually owns the water rights, Hawley explains.  “It has been flowing since the early 1900s and it is potable,” he says.   “I don’t have to treat it. It has a lot of calcium, but the shrimp seem to like that.  Right now it goes into a cooling pond and eventually into a creek.”

Hawley is a fourth-generation farmer with an extensive background in economic development.   “I’ve grown shrimp in warehouses, and I’ve grown shrimp in prisons,” says Hawley.  “Right now I’m growing them in my garage.  It’s an inexpensive way to diversify agriculture,”

He chose freshwater prawns M. Rosenbergii over L. Vannamei simply because he has no experience with saltwater.  “Many people prefer the lighter taste of the fresh water prawn,” he adds.

With a $93,000 equipment loan from the town (numerous banks turned him down due to “unproven technology”) he is constructing two 120×50 ft buildings.  Each will house 30, 8×8 plywood frames covered with 9-ml plastic.   “I’m a farmer, I like to do things as inexpensively as possible.”  He broke ground in mid-September and hopes to be operational by November.

The well water pressure is sufficient to create a flow-through system.  The post-larval (PL) tanks in the building will be elevated.  “We spray the water into the tanks and then it cascades down into the next one so it gets aerated as it goes through,” says Hawley.  “I have a pilot system set up in my garage and the DO levels are fine.”

The flow-through pressure should be able to remove most of the solids, Hawley says.  As the shrimp mature and are moved into the next tank by moving a bulkhead, the flushing action will help with cleaning the tank.  Discharge will go into a settling pond, the solids will be sold as fertilizer and the water will return to the same creek that has traditionally taken the well water.

“Giant freshwater prawn (M. rosenbergii) need brackish water to reproduce and they don’t survive below 57°F,” says Hawley.  “I’m at 5,000 feet above sea level so there won’t be any problems with an invasive species.”

“I get SPF (specific pathogen free) 30 day PLs flown up on Delta airlines from Aquaculture of Texas,” Hawley explains.  “We are using a standard feed from Rangen and will get 33-35 gram adults in about three-and-a-half months.”

He hopes to harvest every week and expects an annual production of around 30,000 lbs of shrimp.

“One problem is that they do grow inconsistently so we have to do a fair amount of sorting,” he points out.  “Craig Upstrom (of Aquaculture Texas) and I have settled on a density of about 4 per square foot including the substrate.”

M. Rosenbergii is known for cannibalism and Hawley says he is again going for an inexpensive solution.  “I get some nylon mesh netting from the fabric store that we use in vertical suspension and it seems to be working great.”

Permitting took time but was not difficult, he explains.  He received a “concentrated aquaculture permit” from the state. Hawley pays a set fee to lease the water rights from the town.

“That’s where I have an advantage,” Hawley points out.    “I’m not paying to heat, or treat, or pump my water.”  He estimates his cost of production to be well below the national average of $5.00 per pound of shrimp.

Hawley plans to sell his production at local markets. The local Kroger store sells frozen imported freshwater shrimp for $16.99 per lb and saltwater shrimp for $6.00, says Hawley. To start, he plans to retail his production directly for $20.00 per lb.   “I have letters of intent for over a million pounds right now and there’s interest in over 3 million pounds a year,” he says.  “I am not big enough yet to even come close to that.”

“Wyoming has dozens of these warm water wells,” says Hawley.  “I want to make my system 100-percent expandable.”

“I see potential for a billion pounds of shrimp coming from rural Wyoming,” says Hawley.  “The major cities in Colorado, Idaho and Montana are just hours away and we can ship the shrimp live for about 600 miles.”