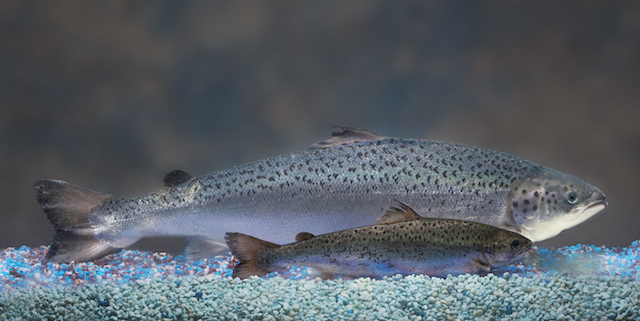 Despite strong opposition by consumer and environmental groups in the United States and Canada, the US Food and Drug Administration (FDA) recently approved the first genetically modified food for consumer consumption – AquAdvantage salmon.

After an exhaustive and unprecedented review of the genetically modified fish, the agency approved the fish for production in Canada and Panama, where the Massachusetts-headquartered company has facilities.

The AquAdvantage salmon eggs, which include genetic material from Pacific Chinook salmon added to the genes of Atlantic salmon, are raised in a facility in the Province of Prince Edward Island (PEI) Canada and are exported to Panama where they’re grown in above-ground tanks.

“Among the requirements, the sponsor AquaBounty Technologies had to meet are that fish is safe to eat; the rDNA construct (the piece of DNA that makes the salmon grow faster) is safe for the fish itself; and the AquAdvantage salmon meets the sponsor’s claim about faster growth.  The FDA determined that “food from AquAdvantage salmon is as safe to eat and as nutritious as food from non-GE Atlantic salmon and that there are no biologically relevant differences between the nutritional profiles of AquAdvantage salmon compared to that of other farm-raised Atlantic salmon.”

“AquAdvantage salmon is a game-changer that brings healthy and nutritious food to consumers in an environmentally responsible manner without damaging the ocean and other marine habitats,” Ronald L. Stotish, Chief Executive Officer of AquaBounty, commented in a press release in response to the agency’s decision.

The FDA outlined restrictions on how the fish will be farmed.  AquAdvantage salmon can be raised only in land-based, contained tanks in two specific facilities in Canada and Panama. The approval does not allow AquAdvantage salmon to be bred or raised in the United States.

In fact, under this approval, “no other facilities or locations, in the United States or elsewhere, are authorized for breeding or raising AquAdvantage salmon that are intended for marketing as food to US consumers”.

The FDA determined that the approval of the AquAdvantage salmon application would not have a significant environmental impact because of the multiple and redundant measures being taken to contain the fish and prevent their escape and establishment in the environment.

“We have waited a long time for this approval and we now have to plan how we will grow the business,” AquaBounty communications director Dave Conley told Aquaculture North America. “We will first have to expand our capacity and begin to grow more fish before the fish goes to market.”

AquaBounty Technologies, first sought approval for its salmon 20 years ago. The company is a majority owned subsidiary of biotech giant Intrexon Corporation.

Purdue University professor of genetics, William Muir, says the FDA approval is a watershed moment for the GMO food industry.

“It breaks the dam,” Muir told Aquaculture North America. “There exists a huge backlog of products that entrepreneurs have ready to go but have not had the major capital necessary to make it through the weight of the review process. Now we might see a lot more product entering the market.”

He expects more GMO food applications in the near future that will help build disease resistant strains of livestock and farmed fish.

Muir assisted the FDA in developing the methodology and model used to review the AquAdvantage salmon.

Currently a Canadian federal court hearing is hearing a challenge to Environment Canada’s approval for AquaBounty to produce eggs at its PEI facility, requesting the federal court to overturn the approval and stop the export of these eggs.

AquaBounty isn’t responding to the lawsuit or any of the critics slamming the FDA decision.  “We will not respond to what our critics say as it only perpetuates their agenda,” Conley explained. “As for the lawsuit, we await the ruling of the court.”

Although the US government has approved AquAdvantage salmon, it will be sometime before the fish will be sold to market. “It is too early to discuss commercialization plans but there are several paths to market that are being considered,” said Conley.