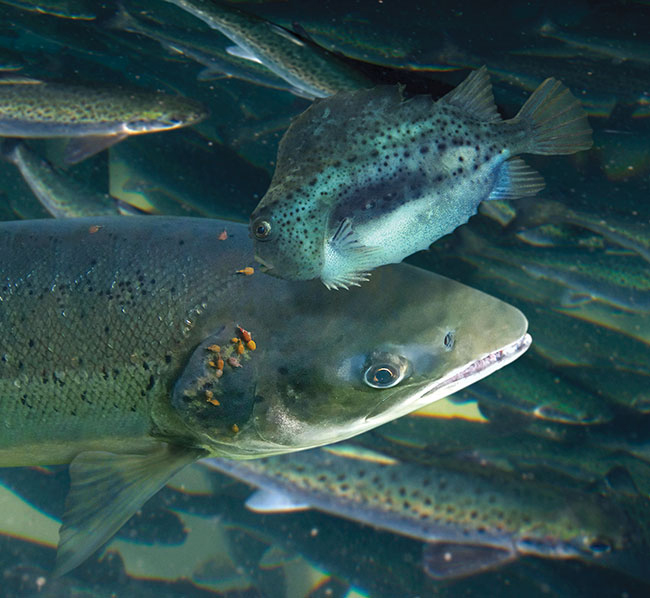 Cleanerfish eating sea lice off of a salmon. Norwegian scientists say farmers have asked whether it’s worth sacrificing one fish to benefit the other Photo: Paulo Oliveira/Alamy Stock Photo

Scientists from Norway have sounded the alarm on the welfare of cleanerfish when used as delousing agents for farmed salmon.

The scientists, from the Norwegian University of Science and Technology and the Norwegian Institute of Marine Research, told Norwegian SciTech News about the need for more insight into what measures the industry could take to further improve the wellbeing of cleanerfish, after hearing similar concerns from local fish farmers.

While their deployment reduces the salmon industry’s reliance on chemical delousing agents, more robust data is needed on their effectiveness and mortality rates when they are deployed in salmonid cages, the scientists said in the report released in April.

In May, Mowi’s operations in Atlantic Canada saw more than 28,000 lumpfish (Cyclopterus lumpus) die in two separate occasions during and post-transfer to its farm sites. The company attributed the deaths of the cleanerfish at the Newfoundland site to rough sea conditions immediately post-transfer, while in New Brunswick, the lumpfish died during transport due to an undisclosed “non-disease” issue.

“Fish welfare is very important and taken very seriously,” said Danny Boyce, an academic leading the cleaner-fish initiative in the Canadian province of Newfoundland and Labrador, where Canada’s first commercial hatchery will be built.

“Constant improvements at the farm level to help improve survival, including fish health, feeding stations, hides and placement locations and staff training are being made,” Boyce said in an email to Aquaculture North America (ANA).

Dr Elizabeth Fairchild, who represents the University of New Hampshire in the US Lumpfish Consortium, said the issues highlighted in the Norwegian report are “definitely of concern and an area all cleanerfish researchers are discussing.”

“We do plan to evaluate how effective lumpfish are in delousing the trout as well as how they fare in the cages,” Fairchild told this publication.

Norway has been using cleanerfish as delousing agent over the past five years but in North America, the practice is just beginning.