Sea lice have long been a research focus at Fisheries and Oceans Canada's (DFO) St Andrews Biological Station (SABS). Recently, studies have focused on the ecology of their early life history stages, non-chemical methods to reduce their incidence, and genetic selection of sea-lice-resistant Atlantic salmon. These elements have been, or are being studied, in an attempt to combat sea lice outbreaks in near-shore ocean caged fish. 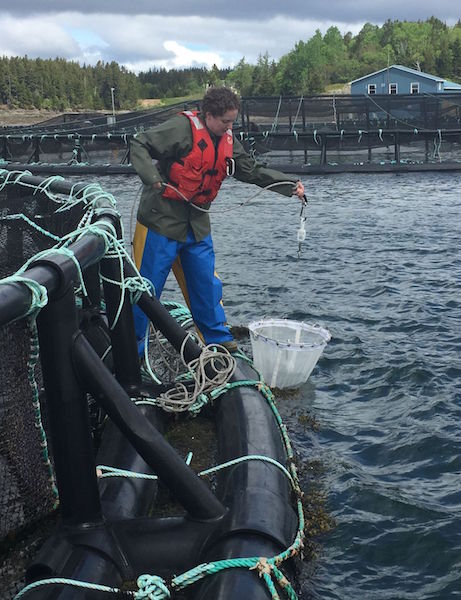 sea lice once they have infested the salmon. This is done by killing, removing and/or collecting the attached parasites. However, by the time the salmon are treated, the female sea lice carrying the egg strings (known as gravids) have already had ample opportunity to produce eggs. These viable eggs can hatch and the subsequent larvae may become the next generation to possibly re-infest the salmon farms.

What remains unknown is what happens to the larvae once the eggs hatch. This information is crucial in order to develop strategies to “short-circuit” the life cycle of the sea louse on farms. Until recently, it was thought that early sea lice larval stages were passive and drifted away with tides and currents. However, these free-swimming larvae have been shown to be active swimmers (up to 20 metres per hour) and continue to be found mostly in close proximity to salmon farms (albeit in low densities). These results also agree with the few available larval sea lice studies from scientists in other salmon-producing countries.

With funding under DFO’s Program for Aquaculture Regulatory Research (PARR), Emily Nelson, a biologist at SABS hopes to help crack the code as to how and where these larvae go and how they survive until the stage when they are able to attach to their host.

“We now believe that these microscopic larvae are not passive, are capable of swimming and must have some mechanism that allows them to stay near farms to re-infest the fish. If we can discover where these larvae are, the potential exists to selectively target the larval stages, before they become infective on the salmon,” Nelson said.

Nelson has spent the past 18 months sampling the water in and around salmon aquaculture sites in southwest New Brunswick. She is looking for the microscopic larval stage of sea lice using submersible pumps and vertical plankton tows. This sampling will continue throughout the year to capture the rise and fall of sea lice densities on salmon farms and – for comparative purposes – at reference sites away from the sea cages.

“Larvae are able to survive on their own for two life history stages – nauplius and copepodid – before they need to attach to a host or fish,” Nelson said. The plankton tows allow her to concentrate the microscopic life from up to 4 m3 of water and take it back to the Biological Station for viewing and counting under a microscope. Here, the number and stage of larval sea lice are recorded into her database.

While the samples to date have revealed some interesting larvae distribution trends in being found in close proximity to the cages, Nelson says that it is too early to conclude too much on the implications of the work. This is due to the amount of work remaining such as counting previously collected samples, another six months of field work, and the subsequent analysis of data.

In addition to this study, a sea lice hatchery has been developed at SABS where Nelson and Dr Shawn Robinson are researching energy consumption of the early life stages of sea lice. This will address risk-related questions such as: how long can larvae survive before they need to attach to a host? And at what nutritional level are they too weak to infect a host?

DFO hopes the findings from these and other studies will provide a better understanding of the reproductive cycle of this parasite whose outbreaks can result in significant commercial losses. This information, along with factors such as water temperatures and currents will be used to develop a model to provide biologically-based information. With this information, better management measures can be implemented to reduce the incidence of sea lice infestations in the salmon farming industry. An improved understanding of the sea lice life cycle will also enable scientists to better understand potential impacts on wild Atlantic salmon.

“Our goal is to better understand how sea lice are remaining at sites to ultimately develop ways to reduce their severity and frequency on salmon. Any way that we can intervene in the reproductive cycle of this parasite is good for the fish and good for the farmers,” said Nelson.

To further this goal, she said the St Andrews Biological Station is also setting up an international network with other larval sea lice ecologists to facilitate research studies in the field so that problems can be resolved more timely and effectively.