The federal government’s “partial shutdown” has ended… for now. All available evidence indicates that a majority of Americans were, and continue to be unhappy with one side or the other, and often both sides, in this “Federal Fiasco.” TV news anchors, columnists, commentators, and everyday citizens in their letters to the editor, frequently compared the opponents in this “Great American Embarrassment” to children on a playground arguing over some mundane matter in a game of kickball, baseball, or other playground activity. 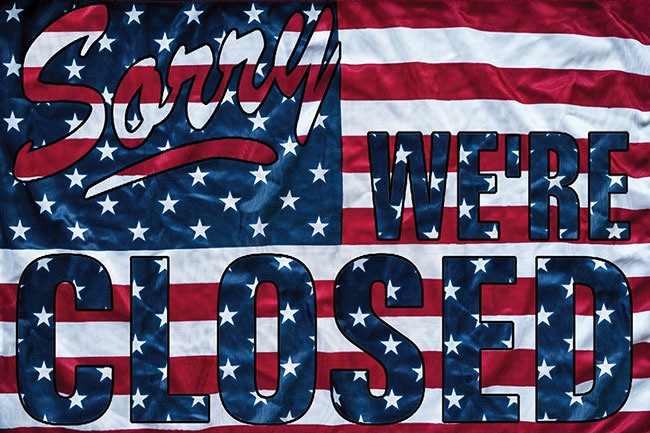 It’s not my place, nor my intent, to enter into this political argument, but it does seem appropriate and timely to examine whether or not the shutdown had, and continues to have effects on aquaculture and associated fisheries programs.

A brief review of the history of the Federal departments involved with aquaculture will help readers assess the effects, and/or lack of effects that the partial shutdown of our Federal Government had on private sector aquaculture.

The place of fish, fisheries, and aquaculture within American governments seems strange to many people, especially foreign observers encountering it for the first time.  The framers of the American Constitution were especially concerned about placing too much power in the hands of a central government, even if that government consisted of representatives elected by the people.  They definitely did not want a king or emperor or any form of monarchy.  The 10th amendment to the US Constitution, part of the Bill of Rights, established a basic principle of American government: all authority rests with the people and the respective States, except for those authorities/powers expressly given to the Federal Government.  Matters pertaining to fish, fisheries, and aquaculture are not mentioned specifically in the Constitution; therefore, such matters are the purview of States, unless the matter falls under some other authority that has been designated as a Federal responsibility, such as interstate trade.

The National Aquaculture Act of 1980 and the National Aquaculture Improvement Act of 1985 established the importance of aquaculture to the Federal Government, the American economy, and the American people.  Although these Acts identified departments and agencies that should assist with the development of American aquaculture, they did not provide them with specific authorities for accomplishing the broad goal of enhancing American aquaculture. Research, technology transfer, technical assistance, and coordination among Federal agencies have emerged as the focus of Federal aquaculture activities.  Regulatory functions, such as, pollution control, limiting the effects of non-native species, including pathogens and parasites, and support for State wildlife regulations have evolved as Federal responsibilities, but are based on the authorities derived from an array of laws not specifically focused on fish, fisheries, and aquaculture.

The Subcommittee on Aquaculture (SCA), a function of the Office of Science and Technology in the Executive Office of the President, is the primary group responsible for coordinating Federal matters pertaining to aquaculture.  Although the basic responsibilities of the SCA have remained the same since 1980, its membership today is roughly half what it was during the first 15 years of its existence.  The SCA was chaired initially by a representative from the Department of Agriculture, with co-Vice Chairs from the Department of Commerce and the Department of the Interior.  These Departments had primary Federal responsibilities, facilities, and experience related to actual production of aquatic/marine animals.  In those early days the SCA was called the Joint Subcommittee on Aquaculture (JSA) and subsequently the Interagency Working Group on Aquaculture (IWGA). I had the privilege and responsibility of representing the Department of the Interior as one of the vice-chairs of the JSA.

In the early 1990s, the Department of the Interior had a slogan “Helping Aquaculture Grow” and focused its efforts on research and technical assistance designed to accomplish that goal. Fish technology centers, fish health centers, cooperative research units, research centers, and the system of National Fish Hatcheries all provided services and technical advice based on many years of experience (over 100 years operating fish hatcheries).

The Department of Agriculture has long considered private sector aquaculture to be a form of agriculture and offered research support, technical advice, and veterinary-based-assistance to the developing American aquaculture industries.  The Department of Commerce had years of experience with crustacean and shellfish research, as well as production hatcheries, to support its roles in helping aquaculture grow.

Current status
During the last 20 years things have changed.  The Department of Agriculture and the Department of Commerce have increased their efforts to support aquaculture, while the Department of the Interior (Fish and Wildlife Service) has evolved into a focus on regulation.  The results of these changes are reflected in the effects of the “shutdown.”

The abilities of Agriculture and Commerce to transfer information and provide prompt, appropriate technical assistance were severely limited.  Research went on, but at a diminished level, and results were essentially unavailable.  Scientists and administrators were prevented from traveling and/or attending conferences where they could confer with aquaculturists.  This was evident at the Northeast Aquaculture Conference & Exposition (NACE) in Boston, Massachusetts in January, where 50 federal employees couldn’t attend. Some of them were scheduled to deliver presentations. The Department of the Interior faced similar constraints, but also suffered from the inability to provide appropriate advice relative to the array of regulations facing growers and shippers of aquaculture products in interstate commerce.

The basic reality of a temporary curtailment in Federal aquaculture programs because of the “partial shutdown” is that there were few day-to-day effects for producers. However, the effects of the public’s embarrassment and anger, caused by the inability of their elected officials to move beyond “playground politics,” remains to be seen.