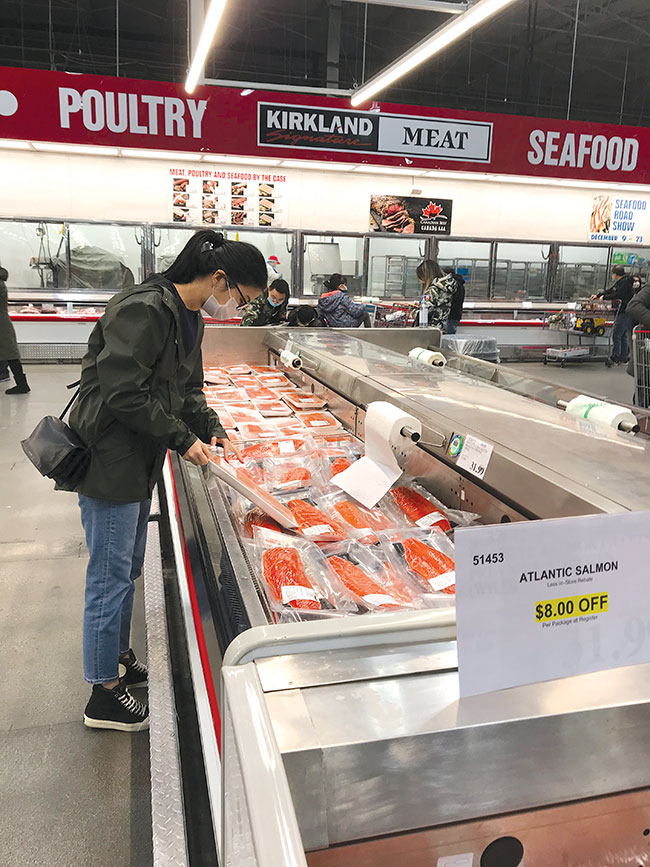 Shopper checks out farmed salmon on sale at Costco in Vancouver, BC Photo: Liza Mayer

Who is the Canadian salmon consumer? What do they think about salmon farming methods? A survey of over 10,000 Canadians conducted this past summer sought to answer these questions and got some surprising answers.

Researchers at Dalhousie University found that Canadians support salmon aquaculture and, across age groups, there’s more support for ocean-based farming than for land-based. The results are in contrast to a federal government report that said Canadians prefer land-based farming and that they’re also willing to pay premium prices.

Dr Stefanie Colombo, lead researcher for the project and Canada Research Chair in Aquaculture Nutrition at Dalhousie University, said the diverging findings point to how “confused and misinformed Canadians are about salmon production.”

“While the federal government often listens to interest groups, it appears Canadians see ocean farms as a very sustainable method of production, in addition to land-based production,” she said.

Phasing out ocean-based salmon farming and moving production to land-based, as the Canadian government plans to do in British Columbia, will have dramatic implications. For consumers, it will mean higher prices, making salmon less accessible. The Dalhousie study found that the typical Canadian salmon consumer who can afford to eat salmon at least once a month earns more than C$75,000 a year ($59,251). That figure is  above the “most typical” earning of C$59,307 ($56,853) in the country, per data from averagesalarysurvey.com. Those who do not eat salmon, accounting for 11 percent of respondents, said price is a deterrent.

“Salmon is very much part of Canada’s new Food Guide, so affordability should be a priority. If we motivate the industry to produce more salmon using land-based farms, we could potentially make salmon less affordable in the immediate future for a growing number of Canadians,” said Dr Sylvain Charlebois, director of the Agri-Food Analytics Lab.

The authors recommend that the Department of Fisheries and Oceans, which regulates aquaculture, considers all options based on scientific merit before enticing the industry to embrace one method of production versus another.