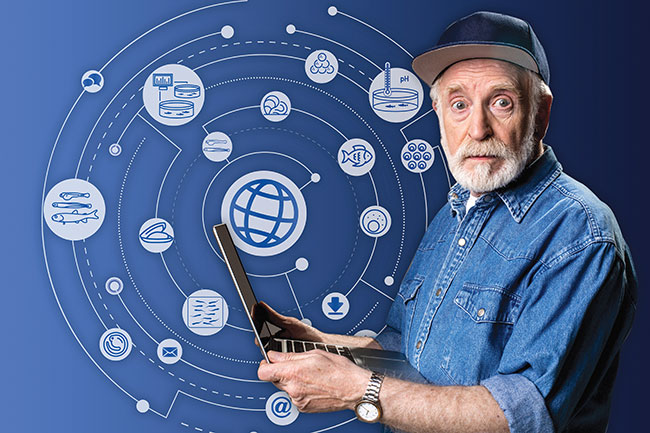 The Internet of Things (IoT) has been generating buzz in the aquaculture industry for its potential to enhance farm management processes and increase profitability. Technology and aquaculture are two different disciplines and some of us would rather not risk reinventing what already works, especially if that means allocating significant time and resources adapting to new ways of doing things. Here is a simple IoT explainer so you can judge for yourself whether it is something to consider now or in the future.

What is IoT and what is the hype about?
The Internet of Things is a system of connected devices, mechanical and digital machines or objects that “talk” or transfer data automatically without human interaction. If the Internet was designed initially for human-to-human and human-to-machine interaction allowing people to communicate or access information anytime and anywhere on any device, IoT extends the Internet’s capability to “things” so they can perform tasks similarly.

Machines can be programmed for automation, how is IoT different?
While you can program your coffee machine to make you a nice espresso at 6 in the morning, IoT makes you espresso when the sun rises, after it drew your curtains to let the sunlight in, switched off your lights and your AC, as it plays Vivaldi on your home stereo system. IoT performs more complex, connected tasks.

Sounds like the technology behind driverless cars, which is cool and a bit scary, but how is it applied in aquaculture?
IoT supports “smart fish farming”. “Things,” in the context of aquaculture, could be fish, shellfish or algae, feeders or even the water in your pond. With IoT, you can use sensors to monitor in real time the quality of water in your pond based on pre-set parameters to ensure the most suitable environment for breeding fish. You can check the quality of water quality going into your tanks by installing sensors right from the source. You can even program the system to feed your fish only when they are hungry. IoT has the potential to revolutionize the way you manage your pond, removing cumbersome manual processes so you can focus on growing your business.

Are there many fish farmers using IoT now?
Yes, there are already many “early adopters” of IoT in the world of aquaculture, from North America to Middle East to Asia and they attest to the benefits of the system from both cost and process enhancement perspectives. There are also many companies developing IoT-based applications designed for aquaculture. These companies create really awesome things like adjusting the feed based on water-quality data obtained on a regular basis, allowing farmers to achieve better Feed Conversion Ratio (FCR). They create programs that control aerators based on dissolved oxygen levels in the pond, which helps farmer save on power costs. The system can also send farmers voice alerts if anything in the pond environment needs immediate attention. The applications are endless.

Sounds promising, but what investments do I need to make to install an IoT system?
A typical IoT system has five components. You need devices and sensors that continuously collect data from the environment and are connected by wireless network such as WiFi or Bluetooth. You also need a gateway to manage traffic going in and out of your network, connection to cloud where you store data, and analytics that analyzes data based on the information or parameters you want to track, such as the pH of pond water. Finally, you need a user interface on your smart phone or tablet from which you view data and execute commands.

Are IoT systems expensive?
Any new technology tends to have a steep price tag but as it matures and as more people use it, the price declines. Ultimately, the cost would depend on the scale of the operation you want IoT-enabled. Many IoT systems and app providers are developing products for farmers with small-scale operations. They’re also looking forward to the time when 5G connection becomes available. 5G will allow faster connectivity so analyzing data is faster and more cost effective.