Fish farming further out into the open ocean has great potential but how economically and efficiently it can be done will be the deciding factor for its growth, say experts 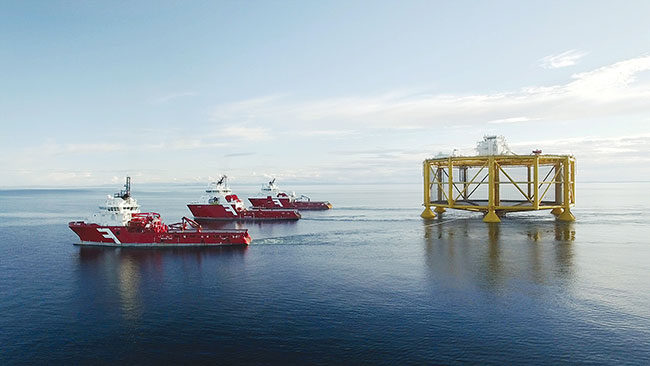 Farming fish in cages located anywhere from 2km to 25 km from the shore, known as open ocean aquaculture, accounted for 29 million metric tonnes or one-third of aquaculture production in 2016, according to the latest figures available from the Food and Agriculture Organization (FAO).

Citing the FAO data, policymakers behind the 2019 paper “The Future of Food from the Sea” say this type of aquaculture could produce six times as much with policy reforms.

Also known as offshore aquaculture, its advocates see a greater role for it as overall aquaculture growth is expected to slow down from 4.6 per cent in 2017-2018 to 2.3 per cent over the period 2019-2030. FAO says the reduced availability of water and suitable production locations in coastal areas, the ever tightening environmental regulations, and outbreaks of aquatic animal diseases related to intensive production practices are among the factors behind the projected reduction in growth rate.

The open ocean can pitch in because the greater depths and stronger currents make it an ideal environment for farmed fish, say experts.

“Offshore, in my view, is the right direction,” said Daniel Benetti, professor and director of aquaculture at the University of Miami-Rosenstiel School of Marine and Atmospheric Science, a panelist at The Future of the Blue Revolution virtual conference hosted by Intrafish this past spring.

“But it is a big investment. It is a big commitment in terms of money and time. We’re talking about long-term projects here; it cannot be short term going to five years. This is five to 10 years at the very least. We’re looking at tens of millions of dollars. It is not for the faint-hearted.”

Fish farmers and offshore farming technology specialists say nothing is more urgent than making operations efficient so that it becomes profitable.

The recent arrival of data-driven technologies in aquaculture, such as machine leaning and artificial intelligence, are significantly improving the sector’s economic viability because they “smarten up” automated processes developed over the past 20 years.

For offshore farming innovator Innovasea, the priority is to achieve efficiency in feed because it accounts for at least 50 percent of the operating costs of a farm, whether in coastal areas or offshore. Among the many data-driven tools the company uses detects fish satiation, helping reduce feed waste and optimize feeding opportunities.

“I think that the biggest lever to pull is feed. Feeding optimization is critical to sustainability and profitability. It’s all about economics,” said Langley Gace, senior VP of business development at Innovasea, which has installed over a hundred open-ocean systems in 25 countries.

“A small tweak in the positive direction of the economic FCR (feed conversion ratio) can have dramatic effects on reducing the cost of operations. In fact, reducing the FCR by 10 per cent on a 3,000-tonne farm can yield a cost-reduction of over a million dollars annually,” Gace said.

But “we really have not had the opportunity to drive that FCR down and make the profitability,” he acknowledged.  However, he is confident that “dramatic improvements” will be seen over the next couple of years as investment in smart technology comes to fruition.

The cost and man-hours necessary to maintain the infrastructure further out at sea, to say nothing of the risks to divers, would make the use of robots such as autonomous underwater vehicles the holy grail, he added. But given that there are still imitations in autonomous tech, the use of robots to reduce diver time and minimize fish-human interactions would be more realistic than replacing humans at this point, he said. 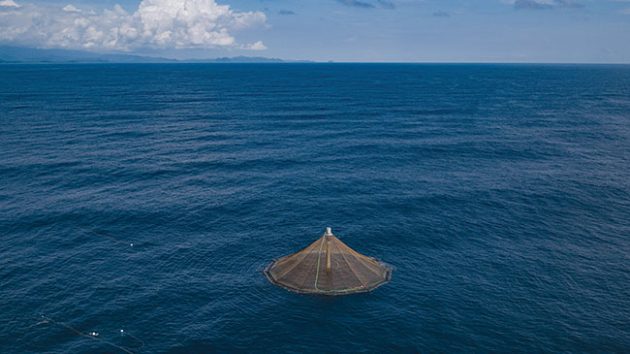 In the United States, unclear regulations, multi-agency permitting and resistance from environmental activists have stalled the development of offshore aquaculture.

Hawaii-headquartered Ocean Era is slated to become the first commercial-scale finfish farm in US offshore waters. However, it has been delayed yet again after its permits were put on hold early this year as environmentalists urged for a further review. The company, formerly known as Kampachi Farms, plans to produce 88,000 lbs of Almaco jack annually in the Gulf of Mexico.

Meanwhile the first and only offshore shellfish farm permitted in US federal waters, Catalina Sea Ranch, has filed for bankruptcy protection in early 2020 amidst a number of allegations of wrongdoing. It has been alleged that it ignored permit requirements from the California Coastal Commission and the US Army Corps of Engineers, that it did not perform required inspections, and that it failed to repair equipment, reported the publication Calmatters.org. The farm, sited roughly 10 km (6 miles)  off Huntington Beach, CA was also hobbled by a wrongful death lawsuit.

Legislative efforts to advance offshore aquaculture have faced delays as well. The bipartisan AQUAA Act has not made any headway since it was introduced to lawmakers for consideration last year.

Executive Order 13921 signed by former President Donald Trump in May 2020 to promote American seafood competitiveness and economic growth faces the risk of being overturned after animal-rights group PETA and “Seaspiracy” documentary producer Kip Andersen jointly urged US President Joe Biden this past May to repeal the EO.

NOAA Fisheries, which under EO 13921 was named as the lead agency for identifying “aquaculture opportunity areas” in US offshore waters, has found via public consultation that resistance is focused on finfish aquaculture. Water quality and impact on marine mammals were the main concerns, said the agency.

“US laws and regulations and permitting processes are impossibly difficult. Investors recognize this but they will not stop;  they will be moving abroad and they will be doing what it takes to do it,” said Benetti of the University of Miami. Benetti agrees that the economics of offshore farming will be the deciding factor in offshore aquaculture’s advancement.

In Canada, offshore farming was among four salmon production systems evaluated in the 2019 report called “State of Salmon Aquaculture Technologies.” The Department of Fisheries and Oceans (DFO) report concluded that offshore farming technologies would require five to 10 years of review to assess their readiness for commercial development in British Columbia, the nation’s salmon farming capital. DFO, the agency responsible for regulating aquaculture, says it is watching developments across the border.

Gace sees nations with friendlier regulations as having the opportunity to lead this sector.

“It’s a seminal moment for those folks to lay the groundwork for a sort of a fair, safe, reasonably paced permitting process and also to identify the economic potentials,” said Gace, adding that there’s considerable interest from Central America, the Caribbean and the Middle East.

The farm started operations in November 2017 and completed its second production cycle in 2020. SalMar plans to expand offshore operations by building additional facilities. It has already applied for a permit for such facility to be established at a site in the Norwegian Sea“further out in the open ocean than any other fish farm currently in operation,” it said in its 2020 Annual Report.

It plans to build an “even better and more cost-effective” Ocean Farm 2, based on lessons learned from the US$120-million Ocean Farm 1. SalMar has made those leanings available publicly so that the entire aquaculture industry could benefit from them.

Hannus says Aker Solutions has the opportunity to play role in facilitating environmentally sustainable salmon farming further out into the open sea by leveraging its expertise and capabilities from the oil and gas sector. The company signed a deal in December to build two large offshore fish farming facilities for Norway Royal Salmon’s Arctic Offshore Farming project.

Such partnership is not surprising given that both sectors operate in the depths of the sea, subject to the same harsh environments. In California, decommissioned offshore oil and gas platforms at the Santa Barbara Channel are being eyed as potential sites for aquaculture projects. 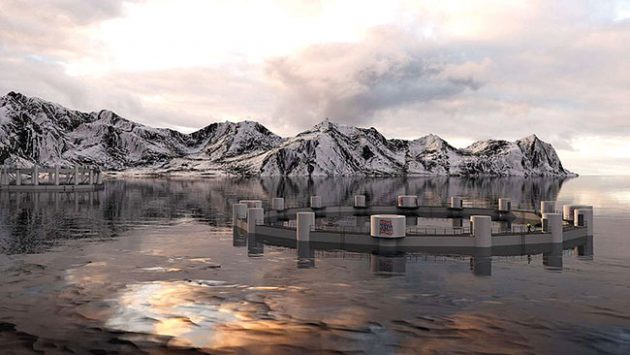 Aker Solutions is parlaying its expertise in the oil and gas sector into the construction of structures for fish farming in the deep sea
Photo: Aker Solutions

It takes a village
Hannus acknowledged, as did SalMar, that inter-disciplinary partnerships are required for the sector to succeed. Shoreside infrastructure such as hatcheries and nurseries will be crucial in supporting the sector’s development.

For example, keeping fish longer in land-based hatcheries and the nurseries will result to more hardy fish that would withstand the offshore environment better.