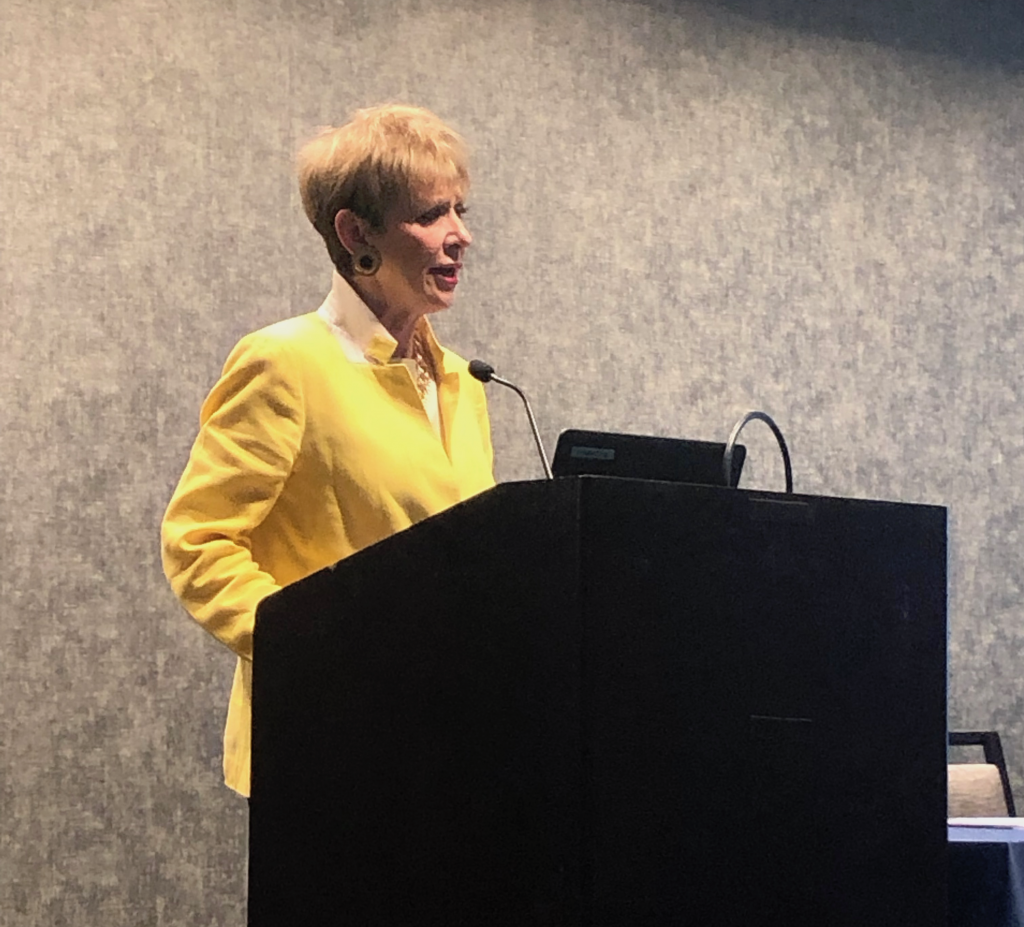 With extensive experience in the consumer-packaged goods industry, Sylvia Wulf knows a thing or two about understanding and responding to the needs of consumers. Now at the helm of a company that is redefining sustainable food production through biotechnology, Wulf is taking AquaBounty and the world’s first genetically-engineered seafood – the AquAdvantage salmon – to full commercial production.

Wulf delivered the keynote presentation at RAStech 2019 in Washington, D.C., stressing the importance of RAS and biotechnology in solving the world’s growing food supply challenges.

RAStech caught up with Wulf in an exclusive interview where she offered her thoughts on RAS and the role of science and technology in sustainable food production.

Q: Could you give us an update on commercial production of your AquAdvantage salmon?

Sylvia Wulf: We will have two farms – Indiana (U.S.A.) is one, which is about a 1,200-metric-ton facility that we bought from Bell Aquaculture and have retrofitted. We have conventional or non-transgenic salmon being grown in that facility since last June. We expect to put our AquAdvantage salmon in by the end of (May 2019), so we will be growing those to market weight in Indiana.

We are just completing another grow-out facility that is 250 metric tons on Prince Edward Island (Canada). We will be putting AquAdvantage salmon into the pre-grow out area at the end of (May) as well.

We are not farming conventional salmon in Canada. So both farms will be producing AquAdvantage by the end of May.

Once we harvest the conventional salmon that we have in Indiana we will concentrate solely on AquAdvantage.

Q: It’s been a 30-year journey for AquaBounty to finally get regulatory approval for the first genetically-modified seafood in the market. What has been the learning experience throughout that last decade for the company?

SW: I think the journey has been the learning around the regulatory process for something that we’ve never done before. We are the first approved bio-engineered animal in the world. When we went to apply for approval, there was no process for that at the FDA (U.S. Food and Drug Administration). So we helped them create that testing protocol, all the research that was required – and similarly in Canada.

Because we started from scratch, the learning has been how to apply that process for other species, so we will be thinking about things like shrimp and trout, and others that can be genetically edited or modified.

It’s how we take our regulatory expertise and apply it to other products that will require approval.

Q: The success with the regulators is half of the battle for AquaBounty; the other half is winning over the public and gaining public support for what you are trying to do. What is your company’s strategy for changing the public’s perception about genetically modified seafood in general, and AquAdvantage in particular?

SW: The science is sound. The challenge is consumers don’t understand when scientists speak to us. We have the two leading regulatory agencies in the world who have approved this from a safety (perspective) – safe for consumer, safe for the fish, safe for the environment. And 20 years of research studies prove that safety.
What we have to do is help consumers understand, not just that it’s safe, but the benefits associated with genetic modification. Because as I said yesterday, if we continue to limit ourselves to conventional methodology – whether it’s with fish or crops or whatever – we’re shutting the door on being able to feed people and have a positive effect on the environment.
That’s the concern I have with the anti-GMO lobby. It’s that they don’t understand that the science is designed to solve global challenges; but when consumers understand the benefit of genetic modification and gene editing, they immediately get it because those global challenges are much more important. And as long as it’s safe, they’ll eat it.

Q: The aquaculture industry is being touted for having the potential to help solve the world’s food supply challenges and to do so in a sustainable manner. The AquAdvantage salmon is AquaBounty’s response to that challenge. As a pioneer in genetically engineered seafood, what insights can you provide for other companies intending to go this route?

SW: Number one. Make sure that your science is sound and that there is research to support that science. This is peer-reviewed by experts in the field that have no vested interest in our company. So, the first thing I would say is make sure that the science is sound. Make sure that the research is published. And then work with the regulatory authorities to make sure that they have what they need so that they can make an approval with confidence.
That’s the first thing. The second I would say is be active in engaging consumers, to help them understand why you’ve applied science to solve a problem. I would urge companies to think about the consumer benefits of this science that they are pursuing at the same time that they are building the data to ensure that it’s safe.

Q: How important is transparency for a company such as AquaBounty that is pioneering a consumer seafood product never seen in the industry before?

SW: I think transparency is going to be critical. When I think about recirculating aquaculture systems, one of the benefits to that is you have traceability and complete transparency. It really lends itself to the trend of transparency and traceability. So, we will be completely transparent with the consumers.

Q: You spoke about the potential of RAS for sustainability. What role do recirculating aquaculture systems have in your company’s overall objectives?

SW: The AquAdvantage salmon was really designed to grow in land-based RAS farms. Our fish was designed to operate in that kind of a system. And why we like it is because you can put them anywhere there’s good water and decent utility cost and you can locate them close to consumers. So it capitalizes on the local trend, it capitalizes on the transparency and traceability trend, and that’s the beauty, to me, of RAS. You are minimizing the impact on the oceans, whether it’s wild-caught or ocean cage farming, both of which are viable production methods but – and I am speaking about salmon specifically – if the demand for salmon far outstrips the supply, land-based RAS is the answer. You can locate it close to the population; positive benefits for the environment, positive benefits for the consumer. It really is the future.

Q: In your keynote presentation, you addressed the “Franken-fish” term, which some media reports have used to refer to the GMO salmon. Please expound.

SW: Anybody that has read the story of Frankenstein understands that what he was trying to do was solve a problem. And an uneducated mob killed what they deemed a monster. That, to me, is indicative of what is going on today because they don’t understand that the science is solving a problem. We need to educate consumers so that we don’t reject something that can really solve some substantial global challenges. So that’s what I mean by that. The more that consumers understand how science can be used the better off we are.
The genetic modification took place 30 years ago. We have been conventionally breeding with our breed of salmon. Salmon spawn, eggs get fertilized, we don’t continually genetically modify. We took a gene from a Chinook salmon and injected it into the egg of an Atlantic salmon. There’s 44,000 genes and we took one of a salmon. So, when you think about that, it’s not like we took a tomato and injected it into a salmon. We took a salmon (gene and injected it) into a salmon to help it grow faster and withstand certain conditions.
Since that point in time, we’ve been raising it just like you raise every other salmon. And I don’t think consumers understand that. We’re breeding AquAdvantage salmon with conventional breeding practices just like we do for any other strain of salmon.

My point is, we can’t allow ourselves to be afraid of progress and afraid of science. To me that was the key learning in Frankenstein. The fact that you don’t understand creates fear. Take the time to learn.