While aquaponics is not necessarily a new technology, the industry is relatively young compared to more established food production methods. The industry is growing at rapid pace, however, with new businesses springing up regularly. 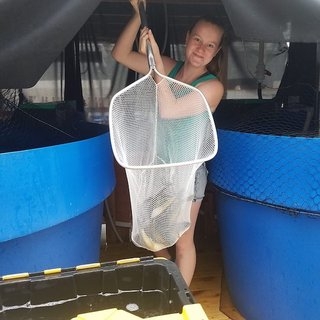 Wisconsin-based Nelson & Pade Inc has been one of the most prominent names in the industry for decades. Originally focused on hydroponics, the company shifted to aquaponics in the early 1990s. The business now centers on optimizing systems and providing tools and education to help individuals and companies get started in aquaponics.

“I would say in the last five or 10 years, there’s been a growing awareness of aquaponics,” says co-founder Rebecca Nelson. “I think a lot of what is spurring that is the focus on two things – the quest for sustainability as well as the local food movement. Just from our experience and perspective, the size of the farms and the number of farms that are opening up are growing really, really quickly.”

Dr Chris Hartleb, professor of Fisheries and Biology at the University of Wisconsin-Stevens Point (UWSP), was focused on aquaculture when Nelson & Pade reached out to him six years ago. Together, they launched the nation’s first college aquaponics course, which eventually led to the establishment of the Aquaponics Innovation Center at UWSP. Hartleb says the rise of larger-scale commercial aquaponics operations speaks volumes about the industry’s evolution.

“Prior to that, aquaponics was limited to people who were doing small- or medium-scale to feed their family and friends, almost like a second job so they could sell their produce and fish on the weekend,” says Hartleb. “We’re just seeing in the past two years, real commercial businesses that employ dozens of people and are producing thousands of heads of greens per day and hundreds of thousands of fish per year.”

Ken Armstrong is deeply involved in the industry in his role as treasurer of the Aquaponics Association, and as owner and founder of California’s Ouroboros Farms. Ouroboros Farms has grown steadily alongside the industry, evolving into an operation with three 20,000-gallon tanks growing greens and fish. Its clients include local consumers and a Michelin three-star restaurant in San Francisco.

“Part of what’s driving that growth is that, with any new industry or paradigm, there are those who jump in head first,” says Armstrong. “Particularly here in California as the drought got worse, it drove people to question the farming methodologies that are being used.”

California has always been a center of food movements; the drive for organic foods started in Santa Cruz, says Armstrong. In the years since, consumers across North America have begun to show the same desire for locally grown organic food.

“Consumers are demanding transparency in their food supply,” says Armstrong. “Aquaponics fits that niche perfectly because of its ability to provide really high quality nutritious, fresh food, closer to urban centers where these highly perishable items get to market quicker.”

The growing industry still faces its share of challenges, however. Brad Todd, greenhouse manager for Lucky Clay’s Farm in North Carolina, says the amount of technical knowledge needed to operate the systems effectively is daunting. Finding qualified employees for existing operations is also a challenge, he says.

The knowledge required “goes from how to diagnose streptococcus in fish, all the way to plant nutrient analysis, and everything in between,” says Todd. “It takes a large knowledge base to do an efficient productive system.”

Edenworks CEO and co-founder Jason Green echoes those concerns. “There is not a huge talent pool globally for technologists and operators in aquaponics; it is a very specialized field. Having both the technology and engineering side and also having operational expertise is a barrier to entry, he says.

Another challenge is the need to educate the public about aquaponics, including correcting misconceptions about it and distinguishing it from hydroponics. “I’ve had people tell me that it was unethical to sell fish that were swimming around in water with algae in it,” Todd says.

He hopes the industry’s growth will lead to a greater knowledge about aquaponics as a sustainable food production system.