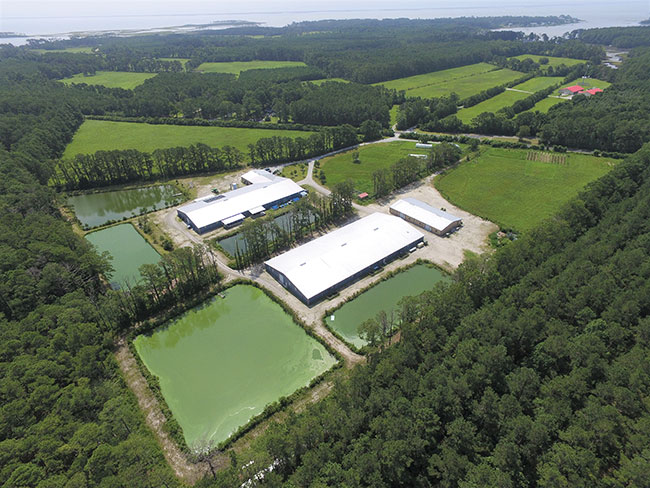 Editor’s Note: In the tiny coastal town of Smyrna, North Carolina, sturgeon farmer I.J. Won has been using recirculating aquaculture systems (RAS) long before RAS made headlines as technology for salmon growouts. Yet, like those pioneering the use of RAS in salmon space, the retired academic knows he has to keep plugging away to achieve profitability. In this account, he makes the case for why RAS could be the best hope to raise fish cleanly. He also tells an eye-opening story of how America’s love for meat and potatoes came to be, and amplifies the need to make seafood a bigger part of the American dinner plate.

How do you make a small fortune in aquaculture? You start with a large fortune.

I first heard the joke many years ago from a professor of aquaculture at North Carolina State University in Raleigh and it amused me.

We often see front-page news stories and pompous ribbon-cutting photos for new fish farms touting new technologies and promising many tons of fish, along with rosy projections on production ramp-ups within in few years. Strangely, often, we don’t hear much about them afterwards; many simply fade away. This is not unusual across the board, small or large in scale. A case in point: a $100-million RAS sturgeon farm started near Abu Dhabi several years ago, which was flaunted as a miracle in the desert. When I recently googled, I found that it had quietly declared bankruptcy a few years back and someone else took over the facility very cheaply. In most cases, these are the so-called OPM projects, funded by “other people’s money.” As long as you don’t spend your own fortune, you can survive but that gives bad rap to the rest of us.

So, how do we really make a small fortune in aquaculture?
I have owned Marshallberg Farm, a Russian sturgeon farm, on the North Carlina coast since 2010 and acquired LaPaz in 2017, another Russian sturgeon farm in the piedmont to the western part of the state. Together, I have been told, we are the largest RAS sturgeon farms in North America. Along the way, I have learned that it takes more than a decade before a sturgeon farm matures enough to make a profit. Who would invest in such a venture, or trust someone with their passions and promises to turn profits? In our case, the farms are self-funded and no one breathes down our necks asking for returns. And yet, unless a business can make a profit, one cannot call it a business but an expensive hobby. Sturgeon aquaculture demands one’s patience because of their long maturation; raising them in RAS also makes it very expensive.

Problems abound in RAS farms: a plethora of sensors, valves and automatic actuators, alarms, feeders, three-phase pumps and air blowers all require regular and rigorous maintenance, and often some go haywire triggering alarms, real or false. In bad weather, we face power outages that, despite layers of protection, still cause havoc and result in occasional fish kills, heartbreaking events to all of us. RAS is still a technology in progress and an engineering adventure/nightmare to farmers.  It inherently requires large capital investment and high operating cost for maintenance. It is a tall order to achieve an acceptable return-on-investment in a reasonable time.  But we must make RAS farms profitable to justify RAS’ existence as a technology.

Let me start with a brief history of our farms and where we are now.
In 2008, while I was occupied in running a geophysical company in Raleigh, I approached NC State University offering to establish the Marine Aquaculture Research Center (MARC) on our 300-acre farm on the coast. The farm then was roamed by a herd of 60 grass-fed Angus cows. My offer included a six-acre plot inside the farm, adjoining an inlet for pumping seawater, and cash to build the facility. After the initial phase was completed in 2010, I granted additional funds for a few research projects to be conducted at MARC along with a resident PhD student.

Later that year, still feeling unsettled, I decided to build a “commercial scale” aquaculture demonstration facility on the farm that eventually became the beginning of the sturgeon farm we now have. Several faculty members from NC State contributed to design, build, and operate the RAS farm. Initially we experimented with hybrid striped bass but, within a couple of years, we settled on raising Russian sturgeon. We imported a batch of fertilized eggs every year from a farm in Germany; they emerged in a few days in our hatchery. Today, the farm includes a building complex of about 60,000 square feet in total and dozens of culture tanks teeming with sturgeon, some of them 10 years old.

LaPaz, the second sturgeon farm we own, had its beginnings around 2004 by Bill White, a principal of a company making allergy medicines, and his friend Joe Doll. As the story goes, Joe used to pilot Boeing 747 freighters to Russia and developed a taste for caviar; he later convinced his friend Bill to raise sturgeon. Eventually, they built the first RAS structures on Bill’s ranch estate near Lenoir, NC, in the Appalachian foothills. They initially brought juvenile Siberian sturgeon from Canada but later settled on Russian sturgeon, using imported fertilized eggs from Germany.

By 2007, LaPaz had its first RAS facility completed and fish were swimming in two-dozen stainless-steel tanks. In the following year, Bill White was diagnosed with terminal cancer and he decided to donate LaPaz along with a portion of his business ownership to NC State. His endowment came with a succinct instruction: the money shall be used “for the purpose of funding research and development of sturgeon aquaculture in North Carolina.” The University’s own faculty members managed LaPaz and, as such, it was never under pressure to make a profit. The school eventually cashed in Bill’s company ownership, resulting in a sizeable endowment fund, likely enough to finance a world center for sturgeon research. Part of that money was used to establish two professorships, including one planned as a named chair, the first such position in aquaculture education in the world.

By 2015, LaPaz started selling its caviar through large wholesalers. Still recovering from the collapse of wild sturgeon trade in the 1990s after the demise of the Soviet Union, the wholesale price of caviar was $1,000-2,000/kg depending on grade. Around this time, China started flooding the world market with cheap caviar and, within a year or two, the price plummeted to $500/kg or even less. Many small farms succumbed to the Chinese invasion. American wholesalers happily bought cheap Chinese caviar, increasing their profit margin.  They even managed to label the Chinese caviar simply as “imported,” which is against regulations that require showing the country of origin. We, the American farmers, could not compete with these prices — they were not even close to our barebone production cost.

Partly owing to the cheap Chinese caviar and facing little income, LaPaz became a money sinkhole for NC State so they eventually decided to unload it. I made an offer to NC State and acquired it in 2017; thus, I ended up owning two RAS sturgeon farms in North Carolina. Marshallberg Farm was yet to start serious production of caviar at the time. The two farms have a capacity to produce 4-5 tons of caviar and 100 tons of raw sturgeon meat per year. 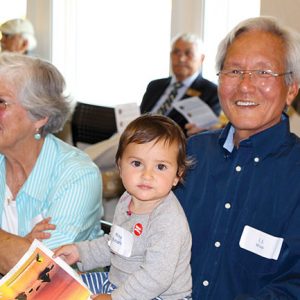 I.J. Won, his wife Sue, and their granddaughter Mina. Won says the industry’s remaining task is proving that RAS can make money 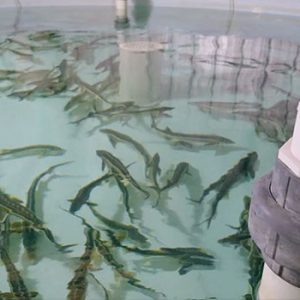 To be fair, Chinese are good hardworking people and they excel in producing anything cheaply. A big factor here is the fact that their fish are raised in open-nets for the grow-out phase, while ours are in RAS for their entire lifetime. RAS cannot compete cost-wise with open-nets in public waters, a practice not allowed in America. We also hear they use preservatives to prolong the shelf life of caviar. If we accept all these practices as legitimate in this trade, it leaves us little with which to persuade the public to eat our expensive caviar instead.

The first time I tasted caviar was in Istanbul in 1998. While touring Grand Bazaar in the old city, I found a small jar of caviar, about an ounce, and paid $15 in a shop that displayed a bewildering array of potions and spices. I brought it to my hotel room overlooking the Bosporus Sea and opened it with great anticipation. All I recall is that it was charcoal black, very salty, and sort of pasty or mushy. Not having known what to expect, that experience passed quickly into a dim memory. I now know how bad that caviar of Istanbul was. Why would anyone buy such stuff? As a caviar farmer, I have had ample occasions for tasting real caviar, mostly ours. Under the pretext that I must know what I sell, I often consume a copious amount of caviar that we produce from both farms, often whole tins in a sitting, with commensurate shots of vodka!

After a decade at Marshallberg Farm, I would say that we have more or less proved that fish can be grown in indoor RAS without damaging any nearby surface waters. For a properly designed and operated RAS there is little chance of polluting the environment and, thus, it is environmentally and ecologically sustainable. Our remaining task is proving that RAS can make money. Without financial sustainability, we cannot ask others to join us in what we do.

To be sure, let’s accept the basic modus operandi of this business here in America: we obey all environmental regulations, pay the due labor costs, produce high quality caviar, and make a profit to boot. It’s a challenge; recently, we decided to bypass the wholesalers and become an online retailer. We branded our caviar by telling the story of how we raise our fish and harvest their roe in the most sustainable ways we know. Our brand also appeals to the Made-in-America patriotism of our customers. We seem to be getting somewhere, as we are slowly turning into a profitable business in spite of the cheap foreign competition. We might make a small fortune in aquaculture after all!

The way forward
This leads us to a bigger question: when will we ever have profitable businesses as norm in the RAS-based aquaculture? Here’s why it is crucial that we succeed in land-based aquaculture:

All reasons listed above are obvious; the first three are facts and the last is a given constraint. RAS is the best candidate for the last; we shouldn’t pollute. RAS involves many emerging and evolving technologies to make it work, but we must try because this is the best we have now to raise fish without polluting the environment. If we set our mind to it with enough passion and resources, we Americans can do it, like going to the moon 50 years ago.

RAS is the best hope of raising fish cleanly.