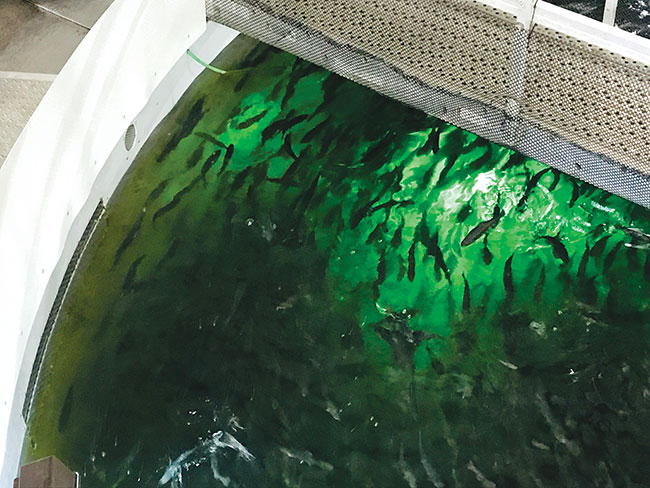 The report has some useful insights. It acknowledges that the hybrid system combining land-based RAS smolt production with open net-pen growout is a viable system. Credit: Liza Mayer

Land-based recirculating aquaculture systems (RAS), hybrids involving land- and marine-based open pen systems, floating closed-containment systems, and offshore open production systems were evaluated using a variety of criteria based primarily on economic viability, readiness for deployment and environmental performance. Its conclusion: land-based (RAS), and a hybrid approach that combines land-based with open net pen production systems are the technologies ready for deployment in British Columbia. Because closed-containment systems and offshore systems are not considered to be ready for deployment, comments here will be limited to RAS and hybrid systems.

Hybrid systems
The hybrid system is ready for commercial application in BC. In fact, hybrid systems with smolt production in land-based RAS systems are already being used successfully in BC and most of the world. Transition to post-smolt production will require only a few relatively minor adjustments. The performance of post-smolts is not guaranteed and is being evaluated. Once evaluation is complete, we will have a better idea of the actual reliability of hybrid systems.

RAS systems
I have written several articles on the hope placed in land-based RAS systems versus the reality that contradicts it. My general conclusion was these systems have not proven to be commercially viable for the rearing of market-size Atlantic salmon. The DFO report has done nothing to allay my fears.

There is nothing in the report that evaluates or provides solutions for the complete lack of financial success of RAS systems for rearing market-size Atlantic salmon. Only excuses are provided:

“It must be recognized that while this assessment can only reflect a point in time, aquaculture technologies are developing very rapidly. The relevance of similar assessments completed just five years ago is limited. Much of the information about the performance and capabilities of aquaculture systems quickly becomes outdated.”

The report then lists the current long-standing problems with RAS systems but provides no solutions:

Legal and Policy
A strength of the report is that it articulates the requirements for a legal framework to enable aquaculture to thrive:

“Clear and effective legislation and policy has been a pre-cursor in other countries to the development of new technologies. Clarity and stability allows investors to leverage capital, which is essential to profitable businesses and investment in innovation.”

For some elusive reason Canada has been completely impotent when it comes to making any progress on this front despite numerous calls for action going back many years.

For more than 36 years Canada was unable to make any progress in solving this problem. In 1984 Professor Bruce Wildsmith from Dalhousie University, at the request of the DFO, published a report outlining the need for the establishment of an Aquaculture Act for Canada. Although the nuance of his arguments may seem a little dated, the underlying problems of not having an Aquaculture Act remain the same today as they did 36 years ago.

Recently, the current Minister of Fisheries and Oceans has been given a mandate letter from the Prime Minister to draft an Aquaculture Act. Hopefully some progress can be made.

Conclusions
A careful read of the report, coupled with the knowledge of the current state of the art for rearing market-size Atlantic salmon using RAS has led me to conclude that the report is overreaching with its conclusion that “Land-based RAS … technology [is] ready for commercial development in BC.” The report has some useful insights. It acknowledges that the hybrid system combining land-based RAS smolt production with open net-pen growout is a viable system.

The report also acknowledges the need for a much-improved governance framework. For any form of farming—including fish farming—to thrive in Canada we need good supportive legislation and policies. For many years Canada has lagged behind our competitors in the arena of policy and legislative development for fish farming. Instead of developing the appropriate standalone legislation for aquaculture it has continued to steadfastly bastardize the Fisheries Act to produce an inconsistent, unworkable regulatory framework for aquaculture in this country. It is time to move forward with a regulatory framework beginning with an Aquaculture Act structured with enabling legislation so that Canada can gainfully participate in the farming of the oceans.

Although in my margin notes I described the report as a superficial blue-sky analysis lacking any critical review of the financial limitations of the proposed technologies, it is worth a read.

Dr Brad Hicks has been working in the fish farming industry for over 40 years. He has raised six species on a commercial basis and helped pioneer sablefish aquaculture. He contributed his expertise to various fish farming operations throughout Canada, the US and Chile, and fish feed operations in Canada. Pertinent to this current discussion, Dr Hicks was responsible for the decision to install the first RAS smolt rearing facility in British Columbia in the mid-1990s. Dr Hicks holds degrees in fish and wildlife biology BSc, veterinary pathology MSc and veterinary medicine DVM.