Water laws in the U.S. have been a confusing mishmash of local regulations, state regulations, and varying interpretations of federal jurisdictions. A recent development brings some clarity, says columnist 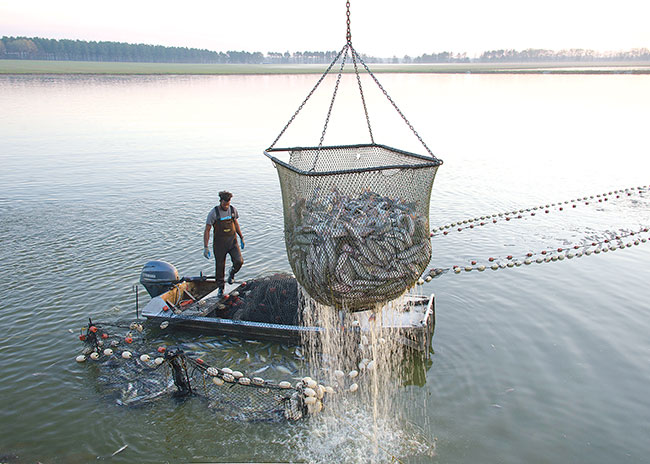 Typical harvest of catfish from a large production pond.  Such ponds are now classified as ‘prior converted cropland’ and no longer fall under the “waters of the United States” definition. As such, they are not subject to EPA regulations, but may be regulated by State or local rules Photo: MSU/Kevin Hudson

The absence of clear definition of which waters within the United States are covered by the Clean Water Act and how regulations implementing the Clean Water Act apply to the waters used in aquaculture facilities have been a source of consternation for fish farmers across the nation. For instance, when a soybean field is converted into a catfish-rearing pond by adding levees, water supply, and drains, is it then subject to regulation under the authorities of the Clean Water Act?

The U.S. Environmental Protection Agency (EPA) and the U.S. Army Corps of Engineers (USACE) may have solved some of these problems for aquaculturists with a recent action.

On 21 April 2020 the EPA and the Department of the Army (Army COE) published the Navigable Waters Protection Rule in the Federal Register to clarify the scope of regulations and define “waters of the United States” (WOTUS).

Fish farmers have not been the only ones confused by water laws and the application of those laws to specific situations.  Water laws in the United States have been a confusing mishmash of local regulations, State regulations, and varying interpretations of federal jurisdictions.

In general, federal rules and regulations apply only if specific authority is claimed under the Constitution or specific statutes enacted by Congress and signed into law by the President.

The final rule establishes 12 categories that are not “waters of the United States,” such as groundwater, ephemeral waters, waste treatment systems, prior converted cropland, and many ditches. The final rule also clarifies key items such as: jurisdictional ditches and impoundments, “typical year” and “adjacent wetlands” –- terms that are meaningfully connected to jurisdictional waters.

The new, final rule becomes effective on 22 June 2020, 60 days after its publication in the Federal Register.  Readers interested in additional information can review fact sheets prepared by the EPA and/or the Army COE by entering the following link.

Spokespersons for American fish farmers, including the National Aquaculture Association (NAA) have commented that the new WOTUS rule was well written and easy to understand. Such a statement represents “high praise” from a user group that often is critical of the wording in federal rules.

Although the EPA and Army COE have not provided comments beyond information in the fact sheets, readers should expect additional responses to queries and comments from the public. Past experiences with similar rules point to extended litigation based on challenges from various advocacy organizations that are focused on environmental and/or wildlife issues. Several such organizations have already announced plans to challenge parts of the new rules. Ultimately, case law based on court decisions will provide determinations on the legal definitions pertaining to “Waters of the United States.”