The latest Gallup poll on “employee engagement” in the US  – defined as workers who are involved in, enthusiastic about and committed to their work and workplace – shows the percentage of “engaged” workers is 34 percent. According to Gallup, organizations that are best in engaging their employees achieve more than four times the earnings-per-share growth of their competitors. 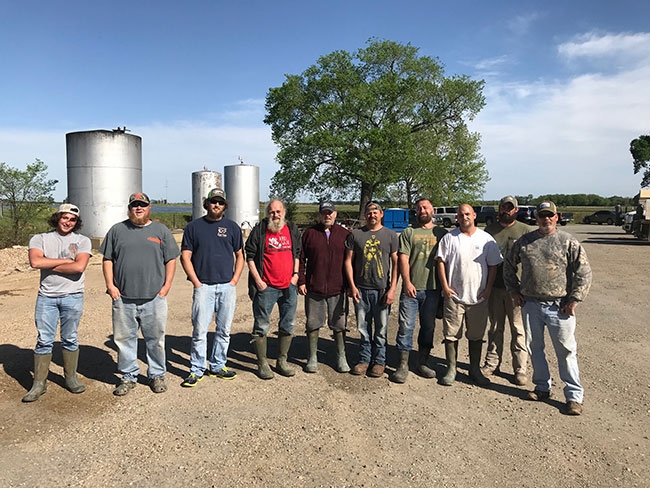 Some of Keo Fish Farm’s employees. When employees live in the same community where they work The latest Gallup poll on “employee engagement” in the US

The figure is the highest since the polling company began reporting on it in 2000. The findings suggest that the rest of US workers (53 percent and 13 percent respectively) are either “not engaged” – those generally satisfied and do the minimum required, but will quickly leave their company for a slightly better offer; or  “actively disengaged” – workers who have miserable work experiences.

Mike Freeze, co-owner of Keo Fish Farm Inc of Little Rock, Arkansas, knows only too well the importance of employee engagement in one’s business. The company has its roots in a family business started by couple Cleo and Martha Melkovitz in the 1960s. Freeze became a partner in the business in 1986, a year after Cleo was killed in a plane crash. The business is a case study in social capital, defined loosely as shared values and understandings that enable groups to trust each other and work together. With the help of 17 employees, including Freeze and Cleo’s wife, Martha, the company now accounts for 80 percent of the market for hybrid striped bass fingerlings in the US, and also dominates the triploid grass carp market.

“Your employees are your most valuable asset ever,” Freeze tells Aquaculture North America (ANA). “One should never forget that. You want your employees to work there, you want them to feel like they’re vested in your company.”

Enhancing employee experience to engage and retain their talent is Freeze’s philosophy as an employer. Keo’s profit-sharing plan enables its workers to feel more vested in the company’s overall success, giving them the initiative to go above and beyond one’s job. “When our employees are loading fish on a truck and one of them spills fish, I don’t say a word to him, but the other employees are going to say: ‘Hey, you need to be more careful!’ Because that is profit they co-own, through our profit-sharing plan,” Freeze says.

Staff members have 25 days annually to take as personal time, including 10 during the Christmas holidays. Paying workers a living wage that will give them a decent quality of life is a win-win for both employees and employers, Freeze adds. “I laugh when people talk about paying employees minimum wage. Yes, maybe you could hire somebody for minimum wage. But people work so they can have time off and be with their family and do things they want, and if they’re not making enough money to do that, they’re not going to be happy and you’re not going to keep them,” he says.

Measuring employee accountability can be a difficult task to accomplish, but at Keo Fish Farm, staff does not have to clock in and out. Instead, they have devised a way to hold them accountable. “Occasionally, you’ll have a little bit of an issue with some not showing up on time because they’re not punching a time clock. But instead of calling them out, they pay $10 into a pot that’s divided among the employees at the end of the year. So it’s almost comical – they’ll sit there with a watch, trying to see if any employee comes in late. It’s just a way you motivate your employees. Instead of penalizing them, you’re rewarding them.”

Some of Keo Fish Farm’s employees. When employees live in the same community where they work

Hiring a local talent pool is a priority for the company. Freeze believes it is essential that employees live in the same community where they work because it fosters the wellbeing of the individual, the company and the whole community.  Looking closer to home for new talent also makes vetting candidates easier, he says. “When we have an opening, my workers are not going to recommend somebody who is not a good worker or has a drug problem because they don’t want to have to work with someone like that, otherwise they’re going to have to pull his weight.”

“We’re one of the few farms that actually use local labor,” he emphasizes. “There’s nothing wrong with H-2A workers (foreign temporary or seasonal agricultural workers), but when you use H-2A workers, there’s a whole set of federal regulations one has to follow. There’s whole different set of headaches. When you use local workers, there’s another set of challenges, but it’s because most of them become like family.  If their children are sick, or they’ve got a problem, you’re going to have to address that. I can’t tell you the number of times I’ve had some employees coming to me to talk about marital problems, financial problems. I’m like a father or grandfather to them in a lot of ways.”

“We have very very low turnover,” adds Freeze. However, he said he’s now faced with an aging workforce; a situation he calls is his biggest challenge. “So I’m trying to bring in some newer guys that have worked with us in the summertime. We hire quite a few high school guys, many of whom may go on to college but keep working with us while they’re in college. After college sometimes they go on to another career but sometimes they stay with us.”

Freeze says the company has tried partnerships with universities via internship programs to bring in talent but found that housing interns could be a challenge. “We were using interns from Scotland at one time. But when you’re in an area where it’s really difficult to find housing, that becomes a problem. So we just to try to get someone locally.”