Fish farm of the future 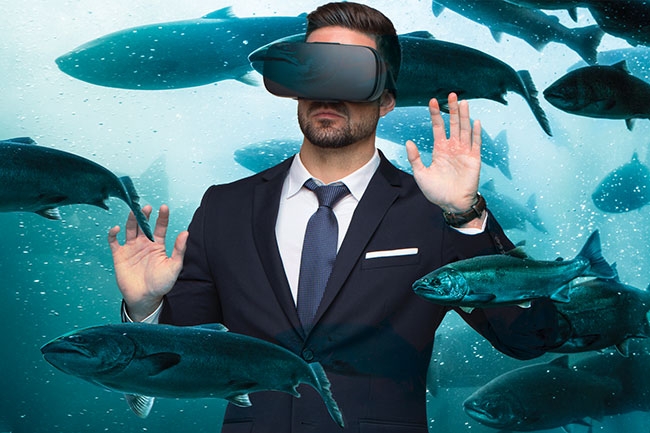 But maybe there’s another benefit—attracting employees.

This form of aquaculture is moving from an experimental pioneer phase to large-scale business, according to consulting firm Deloitte. And the US, which imports over 90 percent of its fish, has become the focus of companies, especially from Scandinavia, that want to expand.

Some of these companies are choosing to build close to metropolitan areas.  Atlantic Sapphire’s facility in Homestead, Florida, is just 30 miles south of Miami.  Whole Oceans and Nordic Aquafarms plan to break ground this year in mid-coast Maine, known for its lobster rolls and craft breweries.  And Nordic Aquafarms recently announced a lease option in Humboldt County, California, which is roughly 300 miles from an airport but boasts redwood forests and a university with a fisheries biology major.

All will use recirculating water technology in large tanks—indoors. “It’s a perfect example of where technology meets nature,” says Nordic Aquafarms’ Marianne Naess.

Keys to success, Naess says, are both superior technology and the right people to run it.  Cultivation of that talent—with specialized knowledge of water chemistry, mechanical and technological systems, and fish nutrition and health management—may be the hardest part of raising the fish.  One thing’s for sure.  Orange hip waders will not be in the dress code.

The aquaculture’s changing landscape is attracting talent from fields far removed from aquaculture. Take Tony Chen, for instance. The MIT Computer Science graduate was developing software for the US government prior to co-founding Manolin, whose software platform aims to help fish farmers optimize sea lice treatments and improve fish health through data analytics.

“Aquaculture for me is a combination of two of my passions. I studied computer science in college, but I had a passion for fishing,” Chen shares.  “My earliest memories are fishing with my dad and I was a competitive swimmer my entire life. I didn’t figure out how to integrate those passions into a career until I discovered aquaculture.”

A visit to Rappahannock Oyster Company in Virginia opened his eyes to how technology could be used to help aquaculture grow sustainably. “They were talking about filter feeders and making protein. I thought this was the greatest thing for the world. Aquaculture seems to be this opportunity where you can combine all that. The ocean can be a solution for food, for energy, for climate change. I think a lot of people who are looking to make a change in this world are starting to recognize that.” But more than the technology that help aquaculture companies succeed, it is the company culture – whether it’s in Virginia or Bergen, Norway – that inspires Chen.  “The salmon industry has grown exponentially over the last few decades but that hasn’t stopped the collaborative culture from being ingrained in each person we’ve talked to,” he wrote in Medium.com.

Bryton Shang is another techie who was unfamiliar with aquaculture before founding Aquabyte in 2017. The San Francisco-based startup helps fish farmers optimize yield and profit through data analytics.

“I came from a computer vision and machine learning background,” the Princeton graduate told the audience at the Animal AgTech Innovation Summit in San Francisco in March.  (He founded a company specialized in computer-aided cancer diagnosis using machine learning techniques in 2015). “I actually wasn’t that too familiar with aquaculture before I started. I was interested in applying that to various other industries. Aquaculture is something that I had found out through a previous co-founder of mine and through various investigations of farms here in California, the Pacific Northwest and Canada to, eventually, Norway.”