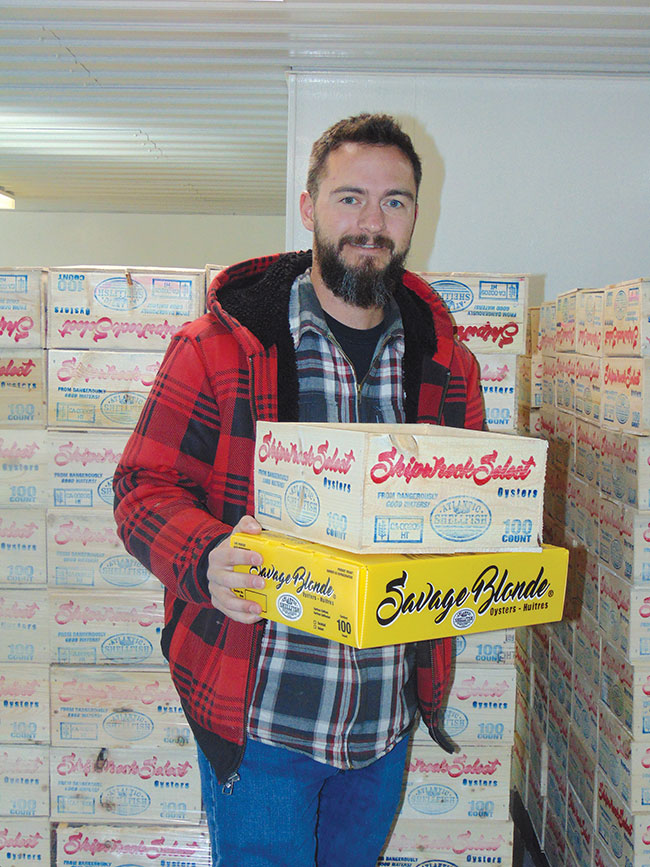 ‘For us, it is not specifically getting rid of plastic but rather being more mindful of how we interact with plastics.’ – Jacob Dockendorff

When Jacob Dockendorff began working in the family shellfish business as a youngster, one of his first jobs was loading and unloading the wooden boxes used to package oysters.

Those wooden boxes are making a comeback at Atlantic Shellfish Products Inc, the family oyster farm Dockendorff now runs. “It is a bit of a ‘back to the future’ moment to be honest with you,” he says as he looks around the farm’s storage area.

The company is moving away from using plastics as much as possible as part of a company-wide effort to be as environmentally sustainable as possible. Jacob and his sister Cindy now manage the company started by their father, Russell Jr, in 1997. Located in Red Head, about a half hour drive from Prince Edward Island’s capital city of Charlottetown, the company has 500 leases, mostly in South Lake, Savage Harbour, Red Head and East Point areas. It has a sister company called PEI Mussel King, which is one of the oldest mussel farming companies in Canada, dating back to 1978.

“For us, it is not specifically getting rid of plastic but rather being more mindful of how we interact with plastics,” Dockendorff explains. “Plastics are very useful in aquaculture and food packaging and when used mindfully and recycled properly they are both environmentally and economically sound.”

Atlantic Shellfish was the first oyster company in PEI to transition from wax-coated cardboard to recyclable plastic packaging almost a decade ago. Dockendorff says the colorful packaging (a different color for each of their brands) remains their primary vehicle for shipping their oysters because wooden boxes are not leak-proof and therefore not accepted by airlines.

The company has also replaced styrofoam floatation devices with buoys made of hard plastic. Unlike styrofoam, which tends to break apart, plastic buoys remain attached to the line even if they malfunction, he says.

“We are mindful to take our waste back to facilities on land rather than cutting knots and bits of rope and letting them fall into the water,” he said. “We use knots that can be loosened so that the same rope can be used repeatedly and replaced when they show signs of wear. They typically have a 20-year lifespan.”

He noted that back in the 70s and the 80s styrofoam buoys were the main method of floatation and ropes were also not typically UV-treated in those days. “Early pioneers of the aquaculture industry in PEI just didn’t know the long-term impacts of practices such as cutting the knots off ropes and letting them stray.”

He says the company follows the code of practice of the PEI Aquaculture Alliance, which encourages its members to use materials with a long lifespan or are recyclable. “More and more the marketplace is demanding that our product be produced in an environmentally sustainable manner and we are just trying to stay ahead of the curve,” he says.