“I want to work with the aquaculture industry itself to find a way forward to a sustainable place where British Columbia is a magnet for capital,” says minister 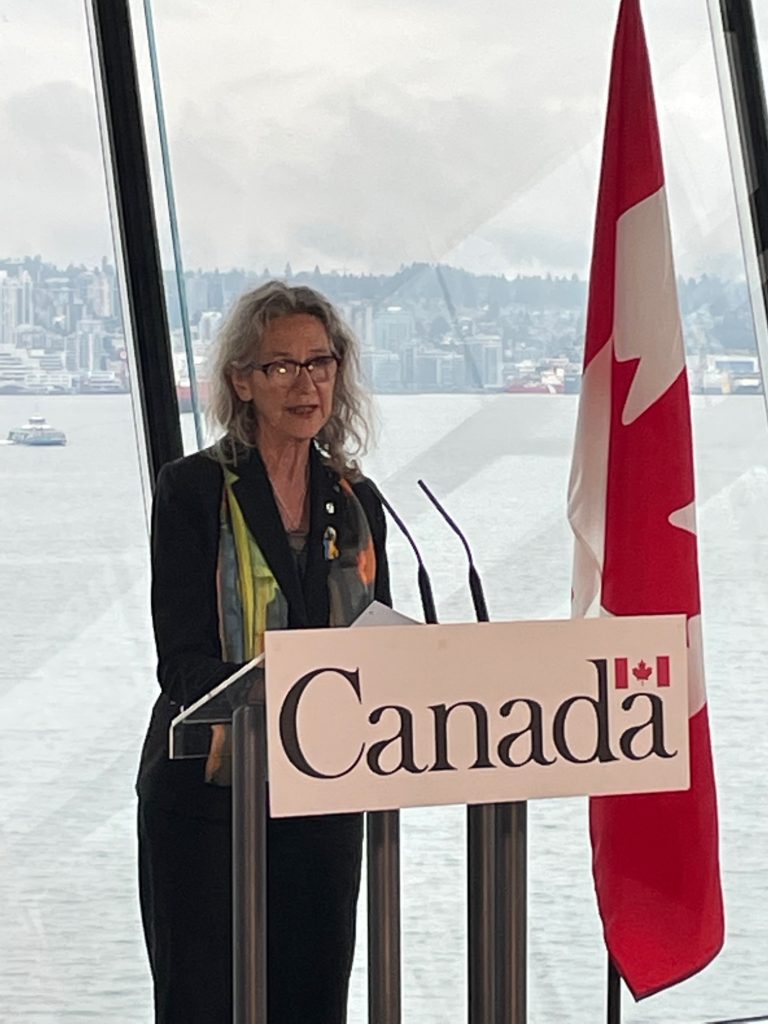 Canada’s aquaculture industry regulator, Minister Joyce Murray, says she’s “confident that there are technologies emerging that we can build on” in transitioning sector to other farming systems (Photo: Liza Mayer)

It’s the kind of pronouncement that will send shivers down the spine of the international salmon farming community and the more than 4,700 industry workers in British Columbia that put food on the table for their families.

The decision will be made “when it needs to be made” about the 79 licenses expiring on June 30, Minister Joyce Murray said at a media briefing on March 11 in Vancouver.

“In the meantime, we are developing a plan; we are consulting with industry and other stakeholders. My goal ultimately is to have a very strong sustainable finfish aquaculture industry here on the coast of British Columbia. I’m confident that there are technologies that can be more protective of our wild Pacific salmon, and that is an imperative for me. And for us as British Columbians that we do everything that is in our power to manage, to protect wild Pacific salmon.”

Murray acknowledged that her own scientists at DFO have found that farmed Atlantic salmon pose only “minimal risk” to wild Pacific salmon. However, she underscored the importance of addressing “any manageable risks” because of the “potential effect on wild Pacific salmon,” she said.

“We know that over the last number of years that wild Pacific salmon stocks have been declining from a variety of impacts and some of which are not in our control and some are in our control. And so, we have a commitment to transition away from open net pen salmon aquaculture. And I will be moving forward on that commitment, as is in my Mandate Letter.”

“This is a very central relationship which I take very seriously,” she said. “And the reason we are putting together a responsible plan is that we want to take the human element, of course, into consideration. Indigenous communities are involved with salmon open net-pen aquaculture. Sure, we’ve been in constant consultation with them. I am looking forward to having a transition that ultimately creates more opportunity for indigenous peoples and Indigenous communities and makes British Columbia a beacon of responsible sustainable salmon aquaculture development.”

This writer pointed out that today’s farmed salmon industry is very different from the industry of years ago, and that the farmers in Campbell River, BC want her to visit to see for herself the investments in innovations that the industry has put in through the years.

“I’m very interested in visiting Campbell River and seeing the industry’s developments in technologies that reduce the contact between the open net-pen farm leases and the wild Pacific salmon, but the reality is that I will be overseeing a transition away from open net pen technology for fin fish, such as salmon aquaculture. I am going to find ways to understand and act on the developments in new technologies that can be protective of our wild salmon. That’s the job. I am very interested in developing a sustainable and responsible salmon aquaculture industry in British Columbia, and I’m confident that there are technologies emerging that we can build on.”

Among the key findings from the engagement activities were that current regulations do not allow industry players to operate with predictability and certainty, and that the lack of certainty in the sector has prevented recent investments in innovation and inhibited stability for its workforce.

“We’re forming up ideas about how to move forward,” says Murray. “I am very mindful of the importance of the jobs and the community, the supply chain, the economics of this industry. And I want to work with aquaculture industry itself to find a way forward to a sustainable place where British Columbia is a magnet for capital and for Innovation to develop a sustainable finfish aquaculture industry.”

The final Blue Economy Strategy will be released “in due course.” Murray thanked her predecessor, Bernadette Jordan, “for doing such a comprehensive job,” with regards to the Strategy. It was under Jordan’s tenure that DFO was given the mandate, in December 2019, to develop a Blue Economy Strategy in order to create jobs and opportunity for coastal communities while advancing conservation objectives.